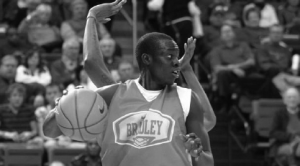 In his first public showing at Bradley, Tyshon Pickett shined in the men’s basketball red and white scrimmage Friday, scoring 16 points in 16 minutes.

The 6-foot-6-inch, 220-pound junior transfer from Dodge City Community College worked his way inside for seven layups, five rebounds and a steal.

“I’m just trying to be an all-around player so I can just help my team out in any way possible,” Pickett said. “If that means having me diving on the floor, rebounding more or getting steals, anything just to win.”

Although he was the only player who scored in double figures, Pickett’s ride to Bradley wasn’t always smooth.

He was a first team All-Passaic County honoree in 2010 in his final year at Passaic High School in New Jersey. Despite earning recognition around the area, Pickett was mostly recruited by Division III schools. In fact, he nearly committed to play for Rutgers-Newark.

“It felt, to tell you the truth, it felt weird and it felt different being recruited by Division IIIs knowing I’m better and a Division I player,” Pickett said. “At the time I went JUCO, I started to get the hang of it, and then Division I [offers] started flowing in and I’m just happy to be here now with all of the hard work I went through.”

After finishing second on his team in scoring and first in rebounding in his freshman year at Dodge City, Pickett topped both numbers by averaging 14.8 points and 8.9 rebounds per game last season.

“We’ve been really happy with Tyshon,” coach Geno Ford said. “I think he’s a guy who has gotten better each week, which is important this time of year.”

When asked if there’s a player he has built a strong connection with in practice, Pickett immediately answered with his roommate and point guard, Walt Lemon Jr.

“I’ve known Tyshon since before he came [to Bradley],” Lemon said. “We’ve been talking on Facebook and messaging to make sure he was straight before he got here, so once he got here everything clicked. I don’t know how to explain it but I know what he does and he knows what I do, we both just play hard so it’s kind of easy to play with him.”

While coach Ford says that he doesn’t usually expect first-year players to hit their stride until January, he said Pickett brings an extra dimension as a forward who can pass and drive.