Schmidt makes most of her senior season

Volleyball player helps lead team and program to the next level 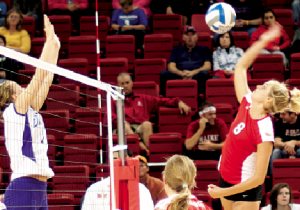 The life of a middle blocker in volleyball is one filled with fast- twitch reactions, extreme focus and unbridled emotion. Megan Schmidt, Bradley’s senior middle blocker, stands close to the net, ready to pounce at any second.

Like a loaded spring, Schmidt bolts up from the Arena floor against Southern Illinois as if her life depended on it. Schmidt, while in mid-air, slaps down the volleyball as soon as it crosses the net and it hits SIU’s side of the court with a piercing thud.

“All of our sets happen so quickly,” Schmidt said.

The team and Schmidt erupt, if only momentarily, in celebration after a thunderous kill.

“Personally, I am a very emotional player,” Schmidt said. “So when I get a good kill, it results in an insane surge of energy for myself and the team. “

Then it’s back to business. Schmidt and the team shout instructions to one another until Schmidt stuffs an SIU scoring attempt with a disheartening block.

Those kills and blocks are what Schmidt has been doing for the volleyball team in her time here. Even while the volleyball program went through losing streaks, Schmidt never let that distract her from her job on the court.

“Being a middle blocker requires a lot of focus and attention to detail,” she said. “I think I stay so focused because of the years of experience I have in the sport and the position. I have been playing since sixth grade and began playing club volleyball in eighth grade. It has been years of hard work and it’s still not perfect.”

After the end of her junior season, her coach for three years, Sean Burdette, was fired. As one of four seniors, Schmidt has been through it all, including the coaching change that brought in newly-hired Jenny Maurer.

“In my personal experience, I have always wanted to look to the future,” Schmidt said. “There are obviously mentalities and skills we have learned from previous coaches, but being open and welcoming to a new coaching staff and new ideas is so important to making effective change.”

Change wasn’t necessarily something Schmidt needed for personal gains. She had already been named to the 2010 CEFCU Classic All-Tournament Team, led the team in blocks in back-to-back years and is the active career leader in kills, aces and blocks.

Volleyball is a team game, though, and Schmidt won’t be happy unless she is helping to take the team to better places in the future, even after she has graduated.

“My goal for my senior year is to help begin the transformation into a winning program through establishing our core values and tradition that can be built upon,” Schmidt said.

Despite the aching knees and bruised shoulders she has put up with for years, Schmidt has helped the team make significant strides this season.

“I think the biggest difference is the new team environment we have established,” Schmidt said. “Coach Maurer has done a great job turning the program around and I am so happy I was able to finish out my career with her as our head coach.”

Though the new era of volleyball has entered the Hilltop, Schmidt isn’t holding back.  Go see for yourself.  Most Friday nights, you’ll see her close to the net, ready to strike at a moment’s notice.