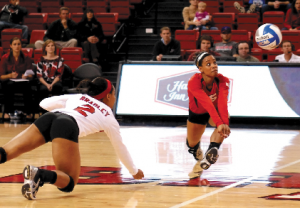 Senior Rachelle Dejean made Bradley history with 12 digs, moving her into first place all-time with 1,361 digs on Friday, in a three-set loss to No. 12 Northern Iowa.

“We have had so many up-and-downs for the past four years, it’s great,” said Chantal Dejean, Rachelle’s mother. “I’m so happy for her. Coming here she had so many high expectations and she met it, so I think she is very happy.”

Rachelle broke Jenny Pavlas’ career digs record, which was set in 1997, when she reached five digs in the third set of the match.

Rachelle also has the opportunity to become the second player in Braves’ history to lead the team in digs in each of their four seasons.

Not too far behind Rachelle in digs is her twin sister and senior teammate Genevieve, who is second on the team in digs this season.

“In our situation, we are at the same school, even battling in the same position day in and day out, but it means a lot that I can share this experience with her,” Genevieve Dejean said. “I have been here every step of the way, everyday supporting her, and we challenge each other everyday and because of that she has been able to achieve this great honor.”

Rachelle was named Country Financial Scholar-Athlete of the Week after breaking the record, and boasting a 3.77 grade point average.

“It was well deserved and she has been looking forward to bigger and better things, and I’m glad that this accomplishment was one she was able to obtain,” Rachelle’s father, Jean-Robert Dejean, said.

Rachelle led Bradley with 12 digs Friday, while freshman Courtney Keefe topped the squad with nine kills. The Braves fell 25-12, 25-13 and 25-20 to the Panthers, who won their 50th consecutive regular-season conference match.

Bradley plays its final two home games of the season this weekend. Tonight, the Braves square off on their Senior Night against Drake at 7 p.m. in the arena. Alumni Night will follow on Saturday with a 7 p.m. match against Creighton.

“It’s definitely been a journey, and so far we haven’t had a chance to go to the [NCAA] Tournament, but we still have that chance and I’m never going to give up,” Rachelle said. “I don’t want to have any regrets by the end of the season, and I just want to lay it all out there on the court.”