Senior stars on and off the field 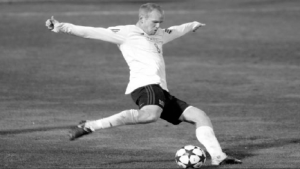 If one were to take a walk and run into Jochen Graf on Bradley’s campus, he would seem like your average student. On the soccer pitch, however, he is transformed into an athlete who described himself as one who would never “shy away from any spotlight.” His easy-going demeanor off the soccer field makes his intensity on it all the more surprising.

While the way he approaches soccer is a large part of who Graf is, where he is from and the experiences of his childhood matter just as much.

Graf grew up in Dallas, Tex. where sports were always a part of family life.

“We were a very athletic family,” he said.

His father, Udo, was a tennis player from Portugal who came to the United States to play tennis in college. Graf’s mother, Steph, was a high school gymnast. He also has three sisters. His younger siblings Brigitte and Monique play for the Bradley women’s tennis team.

He has many memories of playing sports with his sisters and does not deny the competitive nature of those moments.

Skirmishes with his siblings aside, Graf was always involved with sports. From a young age he played everything from basketball to football. Around the age of eight, he started focusing on soccer. He began to play recreationally and soon moved onto a club team.

“I made a team out of Dallas called the Hawks,” he said. “My rec coach coached the club and you train every day. I made the first team and went on with the Hawks until I was 15 or 16.”

As he moved on through high school, Graf decided to continue on to another club called Andromeda Soccer Club.

“It was a little bit smaller but the coaching was top quality,” he said. “It was a different focus. It was more about being a team, which I liked. We were a cohesive unit.”

With Andromeda, Graf won back-to-back national championships and he felt they were almost invincible.

Graf felt fortunate to have played on so many talented teams with great coaching, but one moment stands out more than the rest. The game took place at FC Dallas Stadium, where FC Dallas, the MLS team, plays its home games. Surrounded by fans and swept up in emotion, the moment still gives Graf goose bumps.

“The national championship game was in our city Dallas,” he said. “We had heavy home support. It was 105 degrees and I was drenched in sweat. A ball came across and I rose up to it, found it with my head, and flicked it over the goalkeeper and in. I ran down the sidelines and slid on my knees. When you look back on the pictures of it with your team on top of you, at that age, that’s a really defining moment. Now, I know I can do this.”

Graf has enjoyed success on the pitch, but off it, things have not always been easy. Coming from SMU – a school Graf truly thought he would never leave – to Bradley was a rough transition.

“You don’t have this automatic group that you go through orientation with,” he said. “These guys had already played a season together. This school is a great place, but when you’re new you’re not sure where you fit in. I didn’t blame [my team] because they had already been through this experience. “

Graf said it took some time for him to feel comfortable, and that even a month into his time at Bradley he still questioned his decision. His solution?

“You stick with it,” he said. “One thing I’ve learned is there’s going to be tough times. You’re going to be down, but you’ve got to keep working. There’s going to be a light at the end. Once I got through it, I was happy I didn’t make any rash decisions to leave.”

Graf is more than comfortable at Bradley now. The one thing that he worries about now is a life without soccer.

“I just can’t find it in myself to give up soccer,” he said. “I love the daily grind, training, working out and preparing for games. I love being in the moment. I want to be on the biggest stage possible to perform as best I can. The idea that the top is far enough away that I need to work every day to get there is something I can’t give away.”