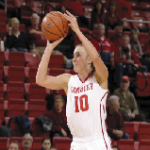 Seniors Brooke Bisping and Katie Yohn were only freshmen the last time Bradley women’s basketball team avoided the play-in round of the Missouri Valley Conference Tournament during the 2009-10 season.

As their careers come full circle and their final season playing for Bradley is winding down, the two seniors saved some of their best basketball for last.

Yohn scored a team-high 23 points to go along with six rebounds and seven steals on her birthday in Bradley’s 77-61 win against Southern Illinois Friday. She added another team-high 21 points and seven rebounds while Bisping matched a season-high with 12 points and she added six rebounds in Sunday’s 73-57 victory versus Evansville.

“Katie Yohn has really been stepping up for us this past week, and that’s awesome,” Bisping said. “She’s peaking at the perfect time. And I think that’s just what everyone’s doing. Everyone is coming into their own, feeding off of each other and having great games, so that’s what we need at this time in the season.”

Yohn was named the Missouri Valley Conference Player of the Week Monday. Bradley moved into sole possession of sixth place in the conference standings, and with a home win this week, they can avoid the MVC Tournament play-in round for the first time since that 2009-10 season.

“It’s a great opportunity, we just need to capitalize on it,” Bisping said. “We control our own destiny, and I think we’ve gotten off to a great start with these past two road wins and having a great week of practice. We’re excited and we’re ready to go. I mean, who wouldn’t want this opportunity; it’s right in our own hands.”

In Friday’s win against the Salukis, sophomores Shronda Butts and Michelle Young finished with 16 and 10 points, respectively. Sunday, the Braves opened the game with a 12-0 lead and never looked back.

In the past three games, Bisping has averaged 10 points, which is nearly double her season average. Young also extended her career-long four game streak of double-digit point totals.

“It was a good road trip,” coach Michael Brooks said. “We were able to take care of business and get us into the six [seed], which is what we need to do to get out of the play-in game. We played pretty well, we jumped on both teams early and were able to sustain it throughout the games, so I was very happy with the way the weekend went.”

The Braves will complete their regular season at 2 p.m. Saturday in the arena against Indiana State.

“It does feel weird,” Bisping said. “You never really understand what the seniors say when they’re like ‘it goes by so fast,’ until it’s like here I am on the eve of my last two home games. It’s sad but it’s been a great four years, I wouldn’t change anything about it.”