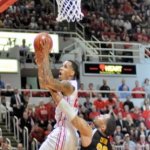 There is a reason Wichita State is the No. 2 team in the entire country. You can throw as many punches as you want at this team, but they will get up from everyone and punch you back even harder.

On Tuesday, the Braves experienced that first hand, falling to Shockers 69-49 in front of more than 10,200 people and a national audience on ESPN2. The Braves also said goodbye
to the four seniors on the team, as Mason Alwan, Walt Lemon Jr., Tyshon Pickett and Jordan Prosser played their final game in Peoria.

With a pregame ceremony that left fans, players, coaches and administrators a little emotional, the Braves had to focus their attention at the daunting task of controlling a team that has swept through the Missouri Valley Conference with ease. The Braves came out with a lot of energy to start the game and kept it close at the beginning, by being down only five points heading into the second media timeout.

Wichita State Coach Greg Marshall said that this was one of the loudest places his team has played in this season and that it’s been used to loud environments, but the Civic Center presented some challenges.

“I’d like to congratulate Bradley on that crowd,” Marshall said. “I thought it was loud, and it made it hard for us to communicate.”

But the Braves had little answer for Wichita State’s Ron Baker who scored a team-high 15 points and triggered a 9-3 run to close out the second half, which had the Shockers up by 10 points
going into halftime. A similar story started the second half as Baker came out firing on all cylinders, and it seemed as if every shot was falling for the Shockers. Wichita State hit four straight three-pointers in a little more than four minute span early in the second half to push the lead to 18 points. The Braves’ poor offensive outing eventually caught up to them as Lemon and Pickett were a combined 11-40 (28 percent) from the field and took 68 percent of the team’s shots. Pickett finished with a double-double, as he collected 15 rebounds and had 13 points. Lemon finished with a game-high 18 points. Coach Geno Ford said that his team played at a very high level, but Wichita State was just too much to handle.

“I thought our guys played their guts out,” Ford said. “I’m really proud of the physical effort that we gave.” Ford went through each senior at length after the game and said that the last home game is always hard because he is especially connected to this group.

“The emotion of senior night is tough,” Ford said. “It is hard for me for to think about Saturday because there are some personal relationships there that make it tough.”

Lemon, who has eclipsed most Bradley statistical records during his illustrious career, said that he has matured as a leader throughout his time at Bradley and thanked his coaches for helping him throughout his journey.

“My leadership has come a long way,” Lemon said. “At first I was the kind of guy that was quiet, but Coach Ford and Coach [Ronald]  Coleman challenged me to be a better leader vocally.”

For how much Lemon has put into the Bradley basketball program, while visibly upset, he  said he knew the game would be tough for him no matter the outcome.

“In the end, it was emotional for me,” Lemon said. “It was my last game [at the Civic Center] and I wanted to leave on a good note, but it is what it is.”

The Braves season isn’t over though. The team heads to Des Moines, Iowa for their final regular season matchup at 2 p.m. on March 1 against Drake.