Soccer downs No. 3 Northwestern: Braves go on the road and upset Wildcats 3-2 in overtime 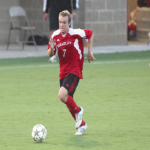 Freshman Christian Okeke snuck a ball past the keeper for his second goal of the game to give Bradley the 3-2 overtime road victory over No. 3 Northwestern.

The game-winning goal came with 2:17 left in overtime and gave the Braves its second victory over a top three team in the country in the last three weeks.

It’s the first team in program history the team has beaten two top three teams in a season. The win improved the Braves record to 5-3-1 on the season.

“We ask our teams to leave a legacy and to leave the program better than you’ve found it,” coach Jim DeRose said. “It gets harder each year, but this team has done something a Bradley team has never done. It’s a testament to who they are as a team.”

The Braves took a quick lead on Northwestern when Okeke corralled a loose ball at midfield and dribbled uncontested to the top of the penalty box and ripped a shot past Wildcat keeper Tyler Miller in the 8th minute. It was Okeke’s first career goal.

It looked like Bradley would pour it on when senior Aaron Birk gave the Braves a 2-0 lead in the 53rd minute but Northwestern battled back.

The Wildcats scored in the 76th and 84th minute to tie the game. Then in overtime it appeared that Northwestern would make the comeback victory, but senior keeper Brian Billings made two clutch saves to keep the game alive.

Finally, Bradley senior forward Wojciech Wojcik gained possession at midfield and hit Okeke with a beautiful pass into the left flank. Okeke did his job finishing and gave the Braves the 3-2 victory.

DeRose said he has been surprised by the team’s overall defending this season, but not the fact that the defense has had its up and down moments this season.

DeRose also said much of the Braves success can be attributed to the depth of the team. Nine different players have scored Bradley’s 13 goals this season.

“I think that embodies a little bit of not only who we are but who we have to be this year,” DeRose said. “It’s kind of that stupid cliché ‘the next man up.’ We’re thankful to have the depth we do.”

The Braves next game is 7 p.m. Monday at Shea Stadium against Western Illinois.