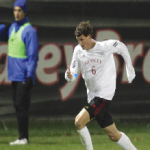 The Bradley soccer team ended its season long five game road trip with a win and a draw in Colorado last weekend.

The Braves rallied twice from a goal down to earn a 2-2 tie with Denver on Friday night. They then made the hour bus trip to face Air Force on Sunday and came away with a decisive 2-0 victory.

Bradley improved its record to 4-2-1 on the season.

Coach Jim DeRose said he was impressed with the way the team responded on the road after being outscored 7-3 in two losses out in Vegas earlier this month.

“After Vegas, where we were, if someone would have told me we’d be 2-0-1 after, in all true road games, I’m not sure I would have believed them,” he said. “I’m extremely proud of the guys toughness.”

Against Denver, the Braves gave up an early goal in the 9th minute, but quickly answered 10 minutes later on a goal from senior Alexei Davies-Campbell off a corner kick from sophomore Andrew Brown.

But not long after Bradley allowed another goal to trail 2-1. It wasn’t until the 71st minute that senior Ross Williams sent a rocket from the top of penalty area into the back of the net to tie the game. Neither team was able to score afterward and the game ended in 2-2 draw.

It was all Braves in the finale of the road trip against Air Force. Two defenders, junior Zach Kovacevic and sophomore Grant Bell, each connected on second half goals to give Bradley the victory. They outshot the hosts 24-9 and owned a 10-3 advantage in corner kicks.

“If I said I wasn’t happy or ok [with how the team is playing], it wouldn’t be true,” DeRose said. “We opened at home, it seems like forever ago. We’ve played five road games since then and it’s not like they’ve been bus trips. We built this program and this team to play the best competition and when you do that you’re going to lose games.”

Just two weeks after beating No. 1 Connecticut, the Braves host No. 6 Cal State Northridge at 7 p.m. tomorrow at Shea Stadium. Bradley will have its hands full with one of the best teams in the country.

“We’re really going to have to be quite good because they can pass it through you and they don’t get bothered a lot by defensive pressure,” DeRose said. “If they’re able to play through us it’s going to be a long night. We’re going to have to be able to capitalize [on offense] on the handful of chances we get because for the amount of goals they’re scoring they’re not giving up many.”

Bradley will also travel to No. 7 Northwestern on Wednesday.