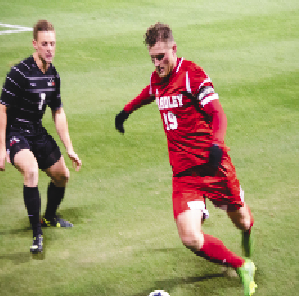 The Bradley soccer team notched a huge conference win over Southern Illinois Edwardsville on a chilly night at Shea Stadium Wednesday.
It was the Braves’ third consecutive shutout victory with a 2-0 score. It is only the second time in program history the team has done that.
Senior Wojciech Wojcik netted the game-winning goal off a deflection in the 71st minute to give Bradley all the scoring it would need. The Braves moved to 8-4-2 on the season and to 2-0-1 in Missouri Valley Conference play.
“It was a great result for us,” Coach Jim DeRose said. “Conference games are obviously very difficult in this league. Edwardsville was preseason favorite to win it. We created 10 corner kicks to their one. I thought we had a good match.”
The match was a defensive battle in the first half as the teams combined for just nine shots. It wasn’t until the midway through the second half that the Braves were finally able to break through.
Sophomore Andrew Brown sent in a corner kick that was cleared by SIUE. But junior Johnny Contreras collected the ball and sent a shot toward the goal that was deflected in the box right to Wojcik. He was able to sneak the ball past the keeper for the 1-0 Bradley lead.
It was Wojcik’s third goal of the season and the 11th of his career.
“[Wojcik] is like a point guard in basketball,” DeRose said. “He has incredible field awareness and field vision. He does all the dirty work. He’s in on the corner kicks and free kicks … bumping balls out with his head. We wouldn’t have a chance to be where we are without him.”
The Braves made it 2-0 when freshman Christian Okeke scored in the 90th minute to seal the victory.
Senior goalkeeper Brian Billings made three saves and earned his 20th shutout of his career to become only the second player in program history to reach that mark.
Bradley returns to action tomorrow in a huge matchup in the conference standings at 7 p.m. on the road at Drake. The winner will take over sole possession of second place in the MVC.
“Drake is the highest RPI team in the league,” DeRose said. “They’re a very difficult team at home. It’s always a good game. There’s a lot on the line … a lot at stake. We need to get some points.”