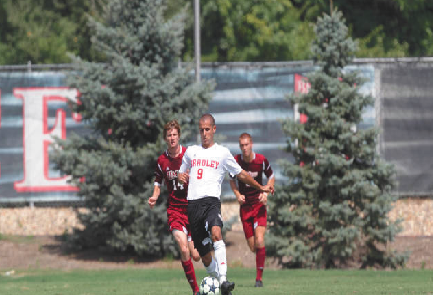 The Bradley soccer team dropped to 2-2 on the season after two losses at the UNLV Nike Invitational in Las Vegas last weekend.

The Braves were outscored 7-3 in the two games against UNLV and UC Riverside. This following the first two games of the season where the team did not allow a goal.

Senior forward Alon Badat scored all three of Bradley’s goals in the two games, including the fastest one in school history, just 30 seconds after the opening whistle against UC Riverside.

“They got on top of us and we had to fight uphill [against UNLV],” coach Jim DeRose said. “To their credit, they scored some absolutely spectacular goals…world class stuff. [Against UC Riverside] we had some bad luck and unfortunately we came out on the bad side of it. But certainly we aren’t going to feel sorry for ourselves.”

The Braves fell behind 1-0 seven minutes into Friday’s game against UNLV. Badat’s breakaway goal in the 11th minute quickly tied it, but it was all UNLV after that as they scored three unanswered and went onto win 4-1.

Sunday’s game against UC Riverside was the exact opposite of Friday’s contest. The Braves jumped out to a 1-0 lead and then had a 2-1 lead early in the second half but ended up losing 3-2.

UC Riverside netted the game winning goal in 90th minute to send Bradley home without a win in the tournament.

DeRose said the team giving up seven goals is not ideal, but the blame lays on the whole the team.

“Those growing pains are going to happen,” DeRose said. “I think for us it’s going to be more about collective team defending, not just the back four. Then the other side of it, we’re not a program that schedules wins. Four of our next five games are against NCAA tournament teams. Hopefully, it makes us better for October.”

The Braves continue their season-long five-match road trip by playing the No. 1 team in the country, Connecticut, on their home field on Saturday.

DeRose said the team will have no problem getting focused for the matchup despite the rough losses to UNLV and UC Riverside.

“If you can’t get focused for number one in the country on the road you should probably be playing club soccer somewhere,” DeRose said. “I think the focus is trying to get better and there’s not a better team to do it against.”

Bradley does not return home until a Sept. 28 match with Cal State Northridge at Shea Stadium.