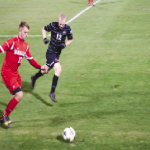 The Bradley soccer team missed an opportunity to claim second place in the Missouri Valley Conference, losing at Drake 2-1 last Saturday. The loss ended a three game shutout streak for the Braves. The team is now 8-5-2 on the season.
“We missed some very good chances in the first half,” Coach Jim DeRose said. “They got two quick ones and we got one back with plenty of time left. I thought it was a typical 2-1 valley game. We just couldn’t spot them the first two.”
Drake struck first after a scoreless first half. Eric Williams sneaked a header past senior goalkeeper Brian Billings in the 59th minute then did it again in the 65th minute to give the Bulldogs a commanding 2-0 lead. But Bradley answered back. Freshman forward Christian Okeke was able to connect on his fourth goal of the season in 77th minute to give the Braves a chance to tie. However, the team couldn’t find the goal in the last 13 minutes and fell to third place in the MVC.
Bradley outshot Drake 20-10 and held 10-3 advantage in corner kicks, but Drake goalkeeper Darrin MacLeod was able to make eight saves to earn the win. With just two MVC games remaining, the Braves will host first-place Missouri State tomorrow at Shea Stadium. The Bears are a perfect 4-0 in the conference and can all but seal up a MVC championship with a win or tie.
“They are an elite defending team in the country,” DeRose said. “They haven’t given up a goal this month. It’s going to be a great challenge for us.”
It’s also senior night for the Braves, who have 10 seniors on their roster.
“They are really good students. They’ve been really committed to this program,” DeRose said. “They’ve done all the things in the season in terms of leading us and have made a lot of sacrifices. That’s what you really look for as a coach.”