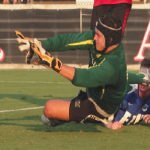 The Bradley soccer team opened its 2013 campaign with a championship in the Hotels at Grand Prairie Classic at Shea Stadium.

The Braves topped New Hampshire and Massachusetts last weekend to capture the title. It is the 12th consecutive time the team has won its season-opener. It was also Bradley’s first championship in the fifth annual classic.

“That was a great result for us on Friday night [against New Hampshire],” coach Jim DeRose said. “That had an October feel to it. New Hampshire is a great team and lost on penalty kicks to go to the NCAA tournament last season. I thought the great thing about Sunday [against UMASS] is we were able to use our depth.”

Senior Wojciech Wojcik netted a goal in the 59th minute against New Hampshire to give Bradley all the scoring it would need in a 1-0 victory. Freshman Alex Garcia took a shot from the top of the 18 but the ball was deflected to Wojcik who snuck the ball inside the right post from 15-yards out for the goal.

The win advanced the Braves to the championship game against UMASS, who played a double overtime game two days earlier.

This game also went to overtime deadlocked at zero. But in the fifth minute of the first period of extra time freshman Tyler Davis netted his first career goal to give Bradley the win.

Senior goalkeeper Brian Billings made nine saves in the two games and earned the 15th and 16th shutouts of his career. For his work, Billings was named the Missouri Valley Conference Defensive Player of the Week.

DeRose said he was pleased with the way the defense played in the two shutout wins. Coming into the season, the biggest question mark was the Braves had very little experience in the backfield.

“I couldn’t be happier with the way they [the defense] played,” DeRose said. “I’m not going to say it was a surprise, but I was very happy it happened so quick. I thought that would be an area of growth for us to improve in. It turned out to be, at least this weekend, a good strength for us.”

DeRose said he is excited for the potential of this team. There are a lot of guys good enough to earn playing time and he said it was up to him to find the right combination of players for the team to be successful.

The Braves will go on the road this weekend to face UNLV and UC Riverside in the UNLV Nike Invitational in Las Vegas.