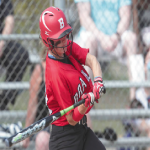 In the past, a record of 21-19 might have satisfied Bradley’s softball team.

Now, it does not come close.

“With this team it’s a lot different,” junior Alex Chandler said. “We all want more and we all expect more out of each other.”

While the Braves are above .500, Chandler believes her and her teammates need to play better.

“I think we know how we need to play and know that we can do it,” she said.

Chandler, a shortstop, is having her best season in her third year at Bradley. She is hitting .303 with three home runs and six runs batted in.

Though she and others are having good seasons, Chandler said the team’s performance has not shown their true potential.

Perhaps the improvement began with the win over Evansville that ended the team’s 7-game losing streak.

The Braves won 11-3 last Sunday, behind strong performances from players like Chandler.

In the victory, she went 3-3 from the plate including a home run and drove in three runs.

“They day before we didn’t come out how we wanted to,” Chandler said about the team’s 8-3 loss against Evansville the day before. “Our team got together and talked about having more of a focus.”

The focus showed as the 11 runs the Braves scored matched the total runs scored from their three previous games.

Chandler said the team showed how good it could be if she and her teammates play well consistently.

“We’ve had glimpses of that [this season],” she said. “We all had really good at-bats and no errors [against Evansville]. It was a completely different team.”

Although the Braves have struggled thus far, Chandler’s confidence is immediately apparent in what she envisions for her team the rest of the way.

“After we sweep Drake this weekend,” she said, “we’ll be in front of them. That’s the number two spot. Of course we want to be number one, but it’s a step.”

Chandler added that for the Braves to continue improving, their performance on the field has to match up with what is going on in their heads.

“The way that we play and the way that we think has to correlate,” she said. “When we have that confidence like we did on Sunday, it shows and we get the W.”

In addition to having the best season of her career, Chandler said she is at her most comfortable on the diamond.

“I’m a lot more comfortable now that I know how things work,” she said. “I like the smaller things. Not the game itself but how much faster it is and just the little things here and there.”

Being more comfortable on the field has led to a better performance on it for Chandler; and even at just over .500, she believes this team will go far the rest of the way.