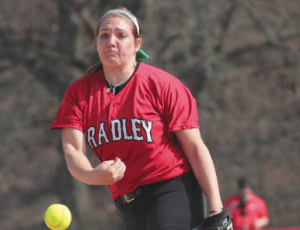 There have been many dynamic duos in sports: Michael Jordan and Scottie Pippen, Kobe Bryant and Shaquille O’Neal, Wayne Gretzky and Mark Messier.

Well, the Bradley softball team has their own combination with junior Mackenzie Camp and sophomore Madeline Lynch-Crumrine in the pitching circle.

“This is probably the best one-two punch that we’ve had since I’ve been here at Bradley,” coach Amy Hayes said. “Either one of them has the capability to shut a team down and they’re very complementary of each other because they are very different in their strengths.”

Bradley won two of its three games last weekend, led by Lynch-Crumrine striking out six in seven innings while only giving up one unearned run in a 6-1 win Friday. In the final game of the series, Camp tossed seven shutout innings to help the Braves win 5-0.

“Defense was absolutely awesome,” Camp said. “I didn’t really throw that great, and I put the defense into a couple of tricky situations and a lot of pressure and they really followed through and had my back. They really stepped up for me.”

Lynch-Crumrine leads the pitching staff with an 8-12 record and 2.42 ERA in 25 appearances this year. Camp closely follows with a 5-7 record, 3.10 ERA and 17 appearances.

“Our staff is very complementary of each other,” Camp said. “We fit together very well both on the field and off the field. I know that if I’m on the mound and I start struggling, I know she’s going to come in and batters are going to struggle with her.”

Sophomores Alyson Clemente and Alex Chandler led the Braves at the plate with three home runs combined in the first game on Friday, while senior Jackie Roth drove in two runners with a double on Saturday.

“It is so exciting sitting in the dugout watching our team cross home plate,” Camp said. “It’s the greatest feeling as a pitcher because, as soon as we got that run, I go out there and I no longer worry about anything. It’s a huge stress off of my shoulders and they have been doing very well and it’s been very exciting to watch.”

Bradley improved to 15-20 overall and 5-7 in Missouri Valley Conference play. The two wins at Missouri State last weekend were the first road victories for the Braves this season.

The Braves will head to Indiana State this weekend for a three-game series starting Saturday before returning to Peoria to face first-place Northern Iowa Wednesday at 2 p.m.

“We talked about it as a team about where we want to be,” Camp said. “We finally decided to stop talking and start doing it. Everything is starting to finally fall into place now. This last weekend was the momentum that we needed to spring us for the rest of the season.”