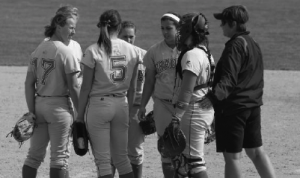 The Bradley softball team has opened their season with a record of 4-6 while playing three ranked opponents away from home.

The Braves have already played No. 20 Stanford, No. 13 Arizona and No. 4 Arizona State.

The team was able to notch its biggest win since reaching the NCAA Tournament four years ago with a 2-1 upset of national power Arizona on Feb. 8.

“It’s not just that they’re ranked. It’s that they’re Arizona,” coach Amy Hayes said. “You talk about a program that encompasses a championship attitude. It meant a lot and we have a ton of respect for the Arizona program. It was pretty cool and great for our kids. We need to continue to play at that level.”

Playing a tough schedule is by design. Hayes said going out and playing nationally ranked teams helps the Braves prepare for the rigors of Missouri Valley Conference play. Bradley has already made trips to New Mexico and Arizona this season and will travel to Tennessee this weekend.

“We know we’re going out and playing good competition,” Hayes said. “It gets us seen on a national scale, which is good. We’re preparing ourselves for what where we believe we’ll be in the postseason. And they [the team] understand that the expectation is not to just go out there and play these games. The expectation is we win these games and possibly get an at-large bid [for the NCAA tournament].”

The Braves will play in the Tiger Invitational in Nashville, Tenn tomorrow and Sunday. They will play IUPUI, Tennessee State, Morgan State and Butler.

“We need to take care of some business against some pretty good teams, but our goal going into this weekend is to go 4-0,” Hayes said.

Hayes said the Braves have big expectations for the season ahead. It starts with playing well in the non-conference schedule before battling the rest of the MVC.

“We want to play at the level we know we can play at,” Hayes said. “As far as the end of the year, we’re going out to be the top in the valley and win that tournament again and get ourselves back to postseason.”