The Bradley soccer team remained undefeated on the season in two home matches last week, boosting its national ranking on TopDrawerSoccer.com to No. 23 spot.

The Braves rose 14 spots in the poll that projects the 48 teams that are most likely to participate in the 2011 NCAA tournament.

“If you ask the players they’ve got an expectation of winning a conference championship and going back to the NCAA tournament,” coach Jim DeRose said. “I’m not going to temper them down from that. They’ve been there. They’ve achieved it. I’m going to let them have their thoughts.”

Bradley improved to 3-0 with a 2-1 overtime victory over Missouri Valley Conference opponent Eastern Illinois. For the third time in as many games, senior forward Bryan Gaul scored the game winning goal in the 95th minute. In those three contests, Gaul had nine points, four goals and an assist.

“When you’re fortunate every once awhile these special guys come along,” he said. “I think this is the ultimate testament as a coach when you become a fan. I’ve stopped being in awe of the things he can do.”

Eastern Illinois struck first with a goal in the 28th minute, but the Braves answered quickly in the 32nd minute on a goal from senior Christian Meza.

Bradley’s defense took over the second half, allowing the Panthers just two shots on goal. 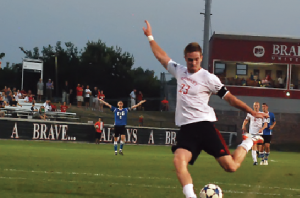 In the second game of the weekend, Bradley managed a 1-1 draw in a torrential downpour against Wisconsin-Green Bay. Gaul’s goal streak came to an end at three games.

Despite the rain, the Braves scored the game’s first goal in the 29th minute when junior Cecil Jeffe

ry poked a shot passed the Phoenix goalie. Wisconsin-Green Bay responded right before halftime with a goal of their own.

The next 65 minutes of the game went scoreless forcing the tie.

Heading into the Dartmouth Classic this weekend, Bradley remains undefeated. But DeRose said he doesn’t envision the team finishing the year without a blemish.