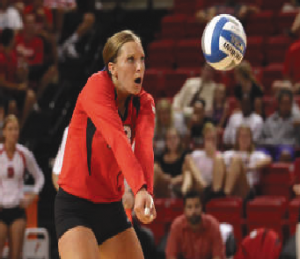 The Bradley volleyball team was flying high after a 5-0 start to the season, its best start ever in program history.

However, the Braves have quickly landed after losing back-to-back games, including their home opener to St. Louis University in four sets Tuesday night.

“It was really exciting,” junior Lauren Zerante said. “We had a lot of energy coming into it since we’ve been on the road the past two weekends, so it’s been good to get back on to our home court in front of a really good fan base. Unfortunately, the result wasn’t what we wanted but we’re learning from it and trying to move on and take something from it.”

Bradley won the first set 25-23, but then dropped the next three sets to the Billikens.

“We told the girls to remember this,” coach Jenny Maurer said. “This is an awful feeling, we don’t like it, and we expect so much more of ourselves. It’s crummy tonight, but at the same time we have to regroup and pick ourselves back up.”

Sophomore Madison Kamp earned her third double-double in her last four matches with 36 assists and 14 digs.  Kamp missed the first match of her career in Saturday’s three-set loss to Western Michigan with a right ankle injury.

“[Kamp] was moving fine,” Maurer said. “Unfortunately there was poor ball control on our end. She was running through and getting to everything. We weren’t connecting with our middles nearly as well as we have. That was easily the worst performance of the season to date because we put up some pretty good wins against some really respectable teams thus far.”

Juniors Amy Angelos and Alise Tupuritis led the Braves with 12 and 11 kills, respectively. Zerante led Bradley with a season-high 20 digs as the libero, after filling in as the team’s setter during Kamp’s injury.

“Obviously, I want to help out my team wherever I can be and wherever we’re successful is where I want to be,” Zerante said. “It’s definitely been an adjustment but it’s something I’m ready to take on.”

Tupuritis and Zerante earned all-tournament honors last weekend at the Panther Invitational after the Braves beat Wisconsin-Milwaukee in five sets and East Carolina in three.

The Braves travel to Brookings, S.D. to participate in the Jackrabbit Invitational Saturday. Bradley faces Wisconsin-Green Bay at 1 p.m. and South Dakota at 7 p.m.

“It’s not our last match of the season; it’s far from it,” Maurer said. “We have a lot to go and if we want a better performance, then we have to give a better effort.”