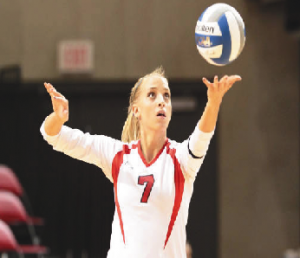 The Bradley volleyball team had a golden opportunity to beat multiple teams that went to the NCAA Tournament last year.

Instead, the Braves dropped all three games in the CEFCU Classic at the arena and dropped to 0-4 in home games and 6-6 overall.

“I mean we certainly don’t want to go 0-3 at home, but at the same time after last year we wanted to raise the bar,” coach Jenny Maurer said. “Our goal is to be at the top of the conference, competing with the best of the best and having a shot at that tournament – both [Missouri Valley] Conference and NCAA. The only way we are going to do that is if we are going to prepare ourselves. And so we didn’t shy away from [tough] scheduling.”

“We knew this tournament existed coming in and we knew we were going to have to play well,” Maurer said. “All of these teams are experienced at winning, and we competed. We are proud of that effort. Did we feel that was our best volleyball? No, not collectively, but at times we were playing some great volleyball. It was just the consistency that got us in the end.”

Saturday, the Braves lost in five-sets to Northern Illinois and in four sets to Arkansas State. Against Northern Illinois, Tupuritis led the team with 17 kills while junior Amy Angelos, who earned all-tournament honors, followed with 11. Angelos’ twin sister, Sarah, led the Huskies with 14 kills. In the same game, junior Lauren Zerante set a career-high with 28 digs.

“We stretched ourselves a little bit more this year, and some of those matches ended up in wins for us,” Maurer said. “We’re still okay. We’re fine. We obviously want to get a win at home but heading into conference we feel we are more prepared than we were even a year ago.”

Bradley ended its non-conference schedule and heads into two conference matches this weekend. Friday, the Braves will travel to Indiana State for a game at 6 p.m. and then they will head to Illinois State at 7 p.m. Saturday. The Redbirds lead the all-time series 55-13.

“We don’t quite know how to finish or how to jump out on a team at this level yet, but at the same time it’s in there,” Maurer said. “We just haven’t found that consistency yet but it’s definitely there. We believe that and we know we are capable of it.”