Volleyball gets comeback victory over SIU 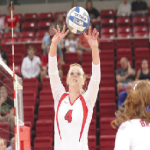 “I told the girls: ‘not today, this isn’t happening and we can’t let down’.”

Those were the words echoed Friday night by coach Jenny Maurer to her team, as they were down two sets to none going into the third set and trying for a remarkable comeback.

Zerante became the 13th player in Bradley volleyball history to eclipse the elite number. Maurer praised her senior captain and said that this achievement proves how hard of a worker Zerante is.

“It (the 1,000 dig club) is a testament to all of the hard work she has put in throughout her career here at Bradley,” Maurer said. “We are elated to see her get these accomplishments and accolades because she is so committed to this team and her play.”

Maurer said she loved the effort her team played with and knows her squad played tough even though they were down.

“We talked a lot about being the aggressor in the match and establishing a solid rhythm throughout the match,” she said. “I think we took that step in the third set on our way to the fourth and fifth sets.”

The Braves then traveled to play Evansville in the second of back-to-back matches, which proved to be too much for the Braves coming off such an emotional victory the night before. They lost to the Aces in four sets (25-27, 25-15, 19-25, 14-25).

“I think we could have done a little better on our side of the court, but it is also very hard to win on other team’s home court,” Maurer said. “I think it was hard coming off that huge win (at SIU), and it was tough to refocus after back to back games.”

Maurer said she knows her team could have done better on their side of the net and understands that the team can only get better from learning from their mistakes.

“When we can control our side of the net and the pressure we put on, we are a very dangerous team,” she said.

The Braves return to action Friday night as they start their longest home stand of the season aginst Indiana State on Friday. They come back and play I-74 rival Illinois State on Saturday night. Both contests are at 7 p.m.