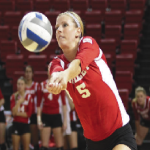 Wanting to start Missouri Valley Conference play on the right foot, the Bradley volleyball team took care of business Sunday, dominating the Drake Bulldogs by sweeping them in three sets (25-20, 25-12, 25-23).

The Braves are priding themselves this season on getting to the MVC tournament. They took the right step on Sunday by winning their opening conference game for the first time since 2005.

But coach Jenny Maurer said her team needs to stay grounded and take the season one game at a time.

“It’s one match, so we don’t want to make it bigger than it is,” Maurer said. “It’s in the right direction we want to go, where our goals are headed, but that is what we have to treat it as. So we have to get back to work at practice and focus on the next two teams (SIU and Evansville).”

The match was highlighted by more consistent play from senior outside hitter Alise Tupuritis, who led the team with 12 digs and 11 kills.

“She’s been such a steady contributor this season,” Maurer said. “She did such a great job knowing when to go out there and get the big emotional kill as much as keeping that ball in play.”

Tupuritis said she knows how big her performance was and how exciting the win was for the team but she wants the team to stay focused on their goals in order to succeed.

“It’s great I got the double-double, but it’s especially great that we as a team won,” Tupuritis said. “Our motto this year is to ‘stay hungry’ so we want to use that and execute on the court.”

Although this was only one game, Tuperitis said she is confident the team will stay on track and continue to play hard all the way until the end.

“Everyone is motivated and excited about conference play because we think this is our year to make it to the MVC tournament, so everyone is working hard and working together,” she said.

The Braves go back on the road for two games this weekend as they play at Southern Illinois on Friday at 7 p.m. and at Evansville on Saturday at 7 p.m. The Braves are 7-3 overall on the season and 1-0 in MVC play. The Braves to return to the Hilltop on Oct. 4 against Indiana State.