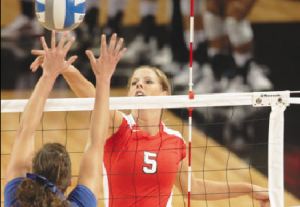 Last season ended on a sour note.  The Bradley volleyball team finished one win shy of advancing to the Missouri Valley Conference Tournament for the first time since 2005.

This season started on a much sweeter note. The Braves went undefeated in the North Carolina Central Invitational, only losing one set in three games.

“For us, for the staff, and for every person involved in Bradley volleyball right now, not making the [MVC] Tournament is not an option,” junior Amy Angelos said. “We’re getting there, we have a bitter taste in our mouths, we’re just playing with a chip on our shoulders and we’re just ready to make it.”

Angelos earned all-tournament honors for finishing each match with a double-digit kill total. In Bradley’s three-set victory against Elon, the Braves converted on 45.6 percent of their attacks, the most efficient attack percentage in more than 20 years.

“We’re in a good spot,” coach Jenny Maurer said. “We’re running on some confidence, for sure. It was a good test for us, to be able to close out two of the matches in three sets. There are definitely some positives to build on.”

Junior Alise Tupuritis led Bradley with a season-high 18 kills in the team’s four-set victory against North Carolina Central. In the win, the Braves set a new program record with a 42.9 attack percentage, the highest mark ever in a four-set match.

“It felt awesome to just get out there and work out some kinks, and to put in all the hard work we did in the preseason out on the court,” Angelos said.

Bradley was ranked seventh in the MVC preseason coaches’ poll earlier this month, after being picked to finish last in the 2011 poll.

“We still have to prove ourselves,” Maurer said. “This is only my second season, so it’s not like anybody is moving us into the top-four. But at the same time, we gained some credibility, we’ve opened some eyes and we’ve proven our ability to compete.”

The Braves will complete their season-long six game road trip at the Panther Invitational in Milwaukee, Wis. this weekend. Afterwards, Bradley will return to Peoria for the home-opener Tuesday against St. Louis at 7 p.m. in the arena.

“The one word that has changed from the previous season was pride. Having that pride, confidence and that swagger,” Maurer said. “Being a Bradley volleyball player is not a shameful thing, it’s something like ‘hey, we’re making waves in this conference and we want to be mentioned in the same breath as those teams that are in the tournament year in and year out.”