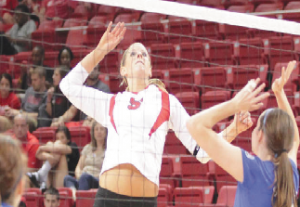 After a 10-hour bus ride, and more than half of the team sick, the Bradley volleyball team had its excuses to struggle last weekend.

However, the Braves battled to a five-set victory against South Dakota State Saturday night after falling to Wisconsin-Green Bay in five sets last Friday in the Jackrabbit Invitational.

“We were doing everything we could to muster up playing,” coach Jenny Maurer said. “It was less than optimal circumstances. But, we have to learn to play with adversity. Everybody sustains injuries; everybody has illnesses on their team. We have to kind of suck it up and learn to play when it’s not always smooth sailing.”

Freshman Jessie Tulacka paved the way in the Braves win with a career-high 16 kills, while four other Bradley players finished with more than 10. The win marked the team’s third true road victory of the season, matching the squad’s road win total from the last four years combined.

“To fall the first match and then to come back and win the second was an awesome accomplishment for us,” junior Amy Angelos said. “Our team at this point last year, or the year before, probably wouldn’t have been able to do that. Being able to just get our minds right and come back and compete in that second match and end up winning in five sets on the home team’s court is just awesome.”

Bradley will face Missouri Valley Conference preseason favorite Northern Iowa in their first game of the CEFCU Classic at 7 p.m. tonight in the arena. The Panthers have been undefeated in MVC play for three consecutive years and enter tonight’s game on a 13-match winning streak against the Braves dating back to 2005.

“We’re excited about it,” Maurer said. “We’re looking forward to being in front of our home crowd, not having to go on the road for the entire weekend, and showing the conference that we’re a better team. We earned a lot of respect and made a lot of headway last year, but we’re definitely not settled and we definitely want to raise the bar this year.”

Saturday, the Braves will face Northern Illinois at 3:30 p.m. and for the second time in her career, Angelos will face her twin sister, Sarah, who is a middle blocker for the Huskies. Bradley also plays Arkansas State at 8 p.m. Saturday.

“Oh gosh, I’m super pumped for that,” Angelos said. “Playing against Sarah is just one of the funniest things ever. My freshman year we played at Northern [Illinois] so I got a little heckling from her crowd, so I’m excited to see what we can give to her this time around.”