Volleyball team has a new coach and a new attitude 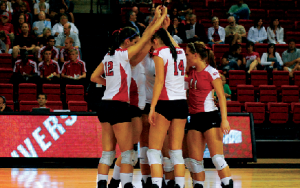 Under first year coach Jenny Maurer, the Bradley volleyball team has raced out to a 4-2 record.

After beginning the season at home in the CEFCU Classic, the Braves took to the road for the first time, playing in the Akron Invitational in Ohio.

Bradley used a 3-0 win over Canisius and a 3-1 victory over St. Francis to catapult itself to a second place finish in the event.

“I was proud of our team,” Maurer said. “We were able to finish the tournament with a win, but we’ve been working really hard this week to clean up areas we need to improve.”

Against Canisius in the opening game of the invitational, sophomores Alise Tupuritis and Amy Angelos combined for 25 kills to give the Braves its second three set sweep of the season.

Maurer said the team has to be good in all areas of the game but especially on defense.

“We want to be tremendous defensively,” she said. “We have to show that we have pride and aren’t going to let a ball hit the floor without giving it everything we can.”

In the second game of the tournament, Bradley lost to host Akron 3-0. The Braves couldn’t find their offense, hitting a season low .072. Tupuritis again led the team in kills with a match high 13.

After struggling against Akron, Bradley returned to win the final game of the weekend against St. Francis.

Angelos had 11 kills and Kamp had her first career double-double recording 36 assists and 10 digs. Both players were named to the all-tournament team.

Maurer said the team is striving to improve during every practice and every game.

“For us, this season, it’s about achieving at the highest level possible,” Maurer said. “Ultimately as a team we need to strive to be the best players and coaches we can be.”