Volleyball team struggles down the stretch 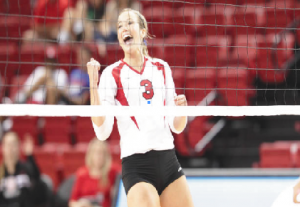 The Bradley Braves volleyball team expected to be better than 7-13 halfway through the season.

“Our original goal was to be at least .500 on the season,” said Madelyn Ervin, senior outside hitter and captain for the Braves.

She and her teammates said they are not satisfied with the team’s performance thus far.

“I would say it’s not exactly where we want to be,” she said. “I know we had really high expectations to start the season.”

Currently, Bradley shares the worst record in the Missouri Valley Conference at 1-8 with Indiana State.

While the Braves prospects do not look promising, there is recent precedent for a successful second half to the season. Last year, with the same record, the Braves finished one game shy of the conference tournament losing their final match of the season.

“It’s not over,” Ervin said. “Last year, we were in the exact same position – we had the exact same record. We still have hope as a team. Anything can happen.”

The problem for the team was a ten-match losing streak that only ended last week with a victory over Evansville.

Ervin said if the team can develop a winning mentality, the pieces are in place to be successful.

“I think that we just need the confidence,” Ervin said. “We haven’t been a winning program for a long time now, and we’re just stuck in that funk. I think that everyone needs to believe that we’re a good team and that we have the talent to beat the other teams. We have the talent to do it, but it’s a matter of getting ourselves out of that funk and mentality that we’ve had for the past three years.”

As a team captain for the first time in her career at Bradley, Ervin believes it has changed the way she approaches the game.

“It put me into a leadership role that I haven’t been used to before,“ she said. “You have to work on your game, but you also have to know that you’re there to help your teammates as well. Sometimes you can’t worry about yourself. It’s about pushing others towards their potential and making sure everyone is on the same page.”

If the Braves are to be successful in the second half of the season and collect more victories, they will have to have show the talent Ervin is confident her team possesses. If they do, a MVC tournament appearance could be in the cards.