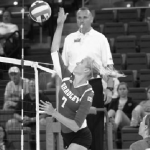 The Bradley volleyball team looked to make a statement this past weekend at the 2013 Billiken Challenge against tough competition.

After winning their first match, the Braves couldn’t come back in either of the last two matches, falling to 1-2 on the tournament and 6-3 overall.

Even though the Braves ended on a low point, coach Jenny Maurer said she is confident in her team.

“It’s difficult to lose at the end, but there are way more positives we can take away from this weekend,” Maurer said. “It was a great level of competition, and those teams are at the level we will be seeing in MVC [Missouri Valley Conference] play. It was a great measuring stick for us.”

Maurer said she knows what the team needs to work on for Sunday’s match against Drake.

“We will continue to get better by practicing and watching film,” Maurer said. “We just need to control and minimize the mistakes we make on our side of the net. Drake has been at the bottom of the conference with us for the past couple of years and we are focused on moving up in the conference, so this is a team we need to beat.”

Maurer said she and the team are excited for MVC play and knows the time to win is now.

“Conference play is where it is at for us and it is our ticket to postseason play,” Maurer said. “We are excited to get MVC play started and start our goal which is playing on Thanksgiving weekend (during the MVC tournament).”

The Braves begin MVC play on Sunday at 2 p.m. against Drake in the Renaissance Coliseum. All children ages 5-14 are welcomed to participate in a clinic after the match with Maurer and some of the players. Participants are encouraged to pre-register by sending and email to busportsmarketing@bradley.edu.