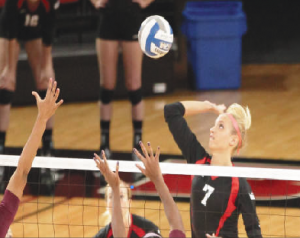 After a 5-0 start to the season, the Bradley volleyball team has struggled the rest of the year.

Last Saturday, the Braves won their final home game of the season in four sets against Drake, after losing to the Missouri Valley Conference leader, Creighton, in four sets Friday.

“There’s no question that we do have talent,” coach Jenny Maurer said. “We’re more fit as a team; we’re better as a team and gradually getting better and better. But, learning how to win when you’ve never done that before is the hardest thing. You talk to any coach and we’re still continually daily pushing buttons and trying to help them through this process, but that’s the key word, it’s a process.”

Senior Madelyn Ervin led Bradley with 12 kills in Saturday’s win, while sophomore Courtney Keefe finished with 11 kills and 13 digs for her fifth double-double this year.

In Friday’s loss to the 27th ranked Blue Jays, junior Alise Tupuritis and Ervin led Bradley with 12 kills. Ervin was honored in a pre-match ceremony on senior night along with Jessica McNellis.

“Senior night is always an emotional night,” Maurer said. “It kind of comes full circle for them as the imminent end of their career, and they’ve meant a lot to this program.”

Friday’s match brought an offensive and defensive outburst by three freshmen. Jessica Teel earned her second double-double with 38 assists and 11 digs, Lea Sack topped the Braves with 18 digs and Jessie Tulacka was third on the team with nine kills.

“I think the future looks bright,” Maurer said. “Day in and day out, all five freshmen are competing for time on the floor and generally just making everyone better. And they feel comfortable, and we have all confidence to put them in and that they’re going to compete. We don’t look to them and expect to see rookie years.”

Bradley has three road matches to end the season after being eliminated from MVC Tournament contention. The Braves will head to Evansville at 7 p.m. Friday and Southern Illinois at 7 p.m. Saturday.