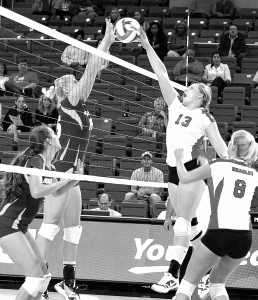 The Bradley volleyball team finished the non-conference portion of its schedule winning two of three games in the Coastal Carolina Classic last weekend.

The Braves defeated Iona and Gardner-Webb 3-0 and 3-1, respectively.

Against Iona, sophomore Alise Tupuritis recorded a career high 17 kills and added 13 digs. It was her first double-double in two years.

In the 3-0 win over Gardner-Webb, Bradley had its highest attack percentage since 2009. Freshman Courtney Keefe paced the Braves’ attack tallying nine kills and eight digs.

The lone blemish in the tournament was a 3-1 loss to Coastal Carolina. Bradley struggled offensively and had only two players with five or more kills. Sophomore Amy Angelos led the Braves with 10 and Tupuritis chipped in five.

Bradley finished the non-conference 6-3 and now heads into the conference season with home games against Evansville and Southern Illinois this weekend.

Schmidt said the players will be ready heading into game one of the conference season.

Although the team is motivated for the game, Maurer said they’re going in with the same mindset as always.

“We have to take care of our side of the court,” Maurer said. “It’s doing the things that we do as Bradley volleyball well. For us, it’s making sure that we’re constantly paying attention to the details and doing our best. We know that we still have a lot of work to do, but it’s just working to play one point at a time and maintaining our focus and confidence on our side of the court.”

Schmidt says the team is going to put on a good show for the fans.