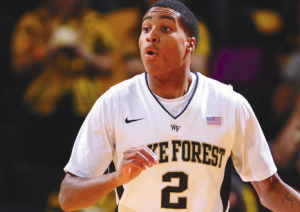 After a disappointing season, the Bradley men’s basketball team received some good news Wednesday afternoon when 6-foot point guard Anthony Fields committed to transfer from Wake Forest to the Hilltop.

“Well, Geno Ford and I really hit it off,” Fields told the Scout in a phone interview. “He’s a straightforward guy and [assistant coach] Willie Scott and I are really close. We talked tradition and how [Scott] left his legacy as a point guard there and how I want to follow in his footsteps.”

Fields visited Bradley last weekend and left Peoria Sunday morning without making a decision. However after talking with friends and family, he made his decision Tuesday. Due to NCAA transfer rules, he will sit out all of next season before becoming eligible for the 2013-14 season.

“[The coaches] were happy, and had lots of excitement,” Fields said. “They know I will come in and work hard.”

Fields participated in an open gym session with the current players Saturday, and left a good impression on senior Will Egolf, who won’t have a chance to play with him because his career will end before Fields is eligible.

The first couple of games, I was just taking off after rebounds and he was just throwing dimes,” Egolf said. “The kid can pass, he’s quick, he’s athletic, he’s got good leadership skills, he’s vocal, he’s a true point guard and that’s what we need. He’s going to be able to come into Bradley and be successful right off of the bat.”

Fields played in 24 games for the Demon Deacons, averaging one point and one assist per game.

“The biggest thing that I talked with the coaches on was working on my mid-range jumper,” Fields said. “I feel like that what separates great point guards. I want to be able to get to the basket and use my jumper, as well as getting bigger and stronger.”

Fields sent in his National Letter of Intent to Bradley Wednesday and said that he wants to complement the skills of freshmen Jalen Crawford and Shayok Shayok.

“I thought he was real good playmaker,” freshman Shayok Shayok said. “He made some nice passes. We played on the same team, and I enjoyed the way he pushed the ball and was able to get his teammates easy looks. I felt like when he was on the court, he made everything a lot easier.”

He fills up one of the two open scholarships after freshmen Devon Hodges and Donivine Stewart decided to transfer from Bradley in past months. According to the Peoria Journal Star, Fields will finish this semester at Wake Forest before possibly enrolling at Bradley for a summer session.

“[He’s] an exciting pass-first point guard, somebody who gets his team going in transition and a great leader,” Crawford said.