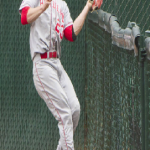 The Braves came into play March 22 on a four game winning streak and looked to start strong in conference play.

However, they were swept in a doubleheader by the Redbirds 13-1 and 7-6 in Terre Haute, Ind., due to inclement weather in Bloomington where the games were to be played originally.

“We’ve had to make a lot of adjustments due to the weather,” coach Elvis Dominguez said. “We were supposed to play this past weekend in Bloomington and had to go to Terre Haute, Ind. in order to play a series against a team that’s 30 minutes away.”

In Friday’s first game, the Braves were outgunned from the start, when Illinois State tagged junior starter David Koll for seven runs in the second inning.

From there, the Braves could not recover and lost on a three-run home run by the Redbirds’ Logan Everett in the seventh inning.

The home run invoked the MVC’s 10-run rule, which means the game ends by the seventh inning or after if either team leads by 10 runs.

After the dismal first game the Braves looked to bounce back only to suffer heartbreak on a walk-off loss to the Redbirds in game two.

Through seven innings the Braves held a 6-3 lead when ISU came back and scored two runs in the seventh, and eventually tied the game with a run in the eighth inning.

The Redbirds won in the bottom of the ninth on a walk-off single by starting pitcher David Suarez, who was pinch hitting in a designated hitter position in his first collegiate at-bat.

“We should’ve won the second game on Saturday,” Dominguez said. “[We] made a mistake, made a couple errors and let them back into the ball game.”

The two losses added up to the first losing streak for Bradley this season. It didn’t last long, however, as the team snapped that streak the very next day with a win in the series finale against the Redbirds.

Sophomore Cameron Roegner picked up the win while pitching six and two-third innings. He yielded four hits, struck out six and did not give up a single run.

“For our guys to come back and bounce back on Sunday, I think that says a lot about this group,” Dominguez said. “Everyone knows we probably should’ve gotten out of there with two wins, but every game is important, and every game we look forward to winning.”

After the Illinois State series, the Braves traveled to Iowa City, Iowa to play the University of Iowa Hawkeyes, who were tied for first in the Big Ten Conference.

The game was a stalemate until right fielder Max Murphy opened up a 1-0 Braves lead with a two-run home run, which sparked a six-run inning.

“I was not doing too well,” Murphy said. “Then he just gave me a really good pitch to hit.”

The six-run inning made the score 7-0, which ended up being the final score with pitcher sophomore Elliot Ashbeck recording the win.

The Braves’ win over the Hawkeyes was their second straight, and gave the team a win over a strong Iowa program.

“It’s always good to get wins out of big name conferences like the Big Ten,” Murphy said. “We got some pretty good teams coming up. A lot of the conference teams are going to be really tough.”

The Braves return home for a four-game home stand, playing a three-game series against Dallas Baptist University on March 28 to 30 and one game on April 2 at 6 p.m. against the University of Iowa.`on Twitter @OchoK41.