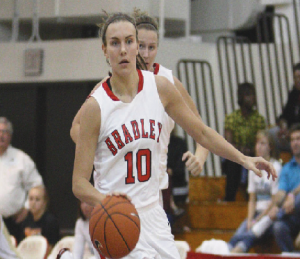 A week after getting its biggest win of the season against Wichita State, the Bradley women’s basketball team blew a 15-point lead at Northern Iowa and lost to the Panthers 70-45.

The Braves began the game on a 15-0 run and led by that score with 13:47 remaining in the first half. Then it fell apart.

“I thought we started off really well,” coach Michael Brooks said. “Then I thought we had some lack of focus issues that really haven’t presented themselves this year. It kind of took us out of our swing and our rhythm.”

Junior Catie O’Leary was the only Bradley player to score in double-figures.  She finished with 12 points and six rebounds.

Coach Brooks said he was disappointed in the team because they did things they haven’t done all season long.

“This team has got a lot of heart and a lot of focus,” he said. “For some reason that day we let some things that were beyond our control get us out of our normal routine.”

The Braves managed to shoot only 30 percent from the field and turned the ball over 18 times. Bradley made only four three-pointers to UNI’s 13.

There is just six regular season games remaining with four of those coming at home.

“I want to go 6-0,” Brooks said. “That’s what I’m looking for. I’m looking to get four wins at home and go on the road to two people we’ve beat already and make sure we solidify those wins. We’ve got to finish off conference play very well. We’ve got to take care of business.”

Brooks said the team wants to be peaking and playing its best basketball heading into March and the MVC tournament.

“For us, it’s about staying consistent with what makes us good,” he said. “That’s running, getting out in the passing lanes, getting tips on the ball, creating chaos on the defensive end, and then pushing the ball as hard as we can. If we can do those things and be consistent [for the rest of the season] we’ll be one of those teams people hate to play.”