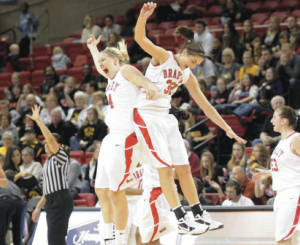 After a 9-3 start in non-confer- ence action, the Bradley women’s basketball team has seen some its ups-and-downs in the Missouri Valley.

The Braves are 2-5 in MVC play highlighted by a win against a previously undefeated in confer- ence Indiana State, 79-58, on Jan. 14. However, Bradley lost 71-59 to a 4-15 Evansville team on Jan. 8, giving the Purple Aces their only conference victory.

“We are right there, we are not far off,” coach Paula Buscher said. “Unfortunately we’ve had some games that haven’t gone our way but I’m still really excited about this group.”

Last Friday, the Braves fell to the defending Missouri Valley champions, Northern Iowa, 71-57. Bradley tied a season-high with 27 turnovers, and was held to 34 per- cent shooting. Senior Leah Kassing and sophomore Kelsey Budd both earned double-doubles with 10 rebounds and 15 and 12 points, respectively.

“We are inching closer-and- closer and we just need to make sure we get over the hump,” Buscher said. “I like this group because they work extremely hard and they want it. The desire factor is probably the biggest piece there.” Kassing leads the Braves with 15.1 points and 8.8 rebounds per game. Kassing also tops the team in shooting percentage and blocks.

“She is our most consistent player,” Buscher said. “I think for as long as I’ve been coaching, she has prob- ably been one of the most improved players from her fresh- man year through her senior year, and I think that is a compliment to Leah and the work she has put in. I think she is one of the best post players in the Valley night in and night out.”

The Braves’ have many all- around guards with junior Katie Yohn and redshirt sophomore Catie O’Leary in the top three of scoring and steals on the team.

“We’ve got a ton of competition in our guard spot,” Buscher said. “If someone is not producing whether that be on the offensive or defensive end, or they are in a little bit of a struggle, I have somebody else right on their heels and I feel like that has helped us.”

Bradley is 11-8 this season, while giving up 68 points a game, the second-most in the Missouri Valley.

“When we are play- ing great defense and it’s converting into quick baskets or good scores, we come back with the same level of energy,” Buscher said. “Sometimes it’s hard to maintain that when you aren’t seeing the immediate results, but you have to trust the process and remain steady with that.”

Bradley heads to Creighton Sunday for a 2 p.m. game before returning to Peoria for a home game against Evansville Thursday at 7 p.m. in the arena.