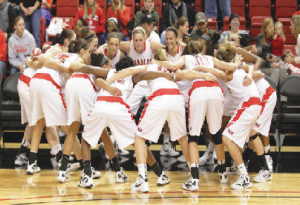 With new head coach Mike Brooks, the women’s basketball team has stepped up its expectations for the new season after winning 18 games last year, the fifth-most in a season in program history.

“It was a big change [between coaches],” junior Catie O’Leary said. “I think the level of consistency and expectations skyrocketed from where it had been in the past. I think all around people are hustling more and working harder knowing that their expectations, individually, are all raised. I think it’s been an upgrade and a shot in the right direction for the team.”

After losing five seniors to graduation last season, the Braves are primed to top their numbers from last year. Senior Katie Yohn said their goal is to win 20 games, however Bradley was picked to finish sixth in the MVC in the annual pre-season poll.

“Obviously getting put at sixth isn’t a desirable spot. But am I surprised? Not as much,” O’Leary said. “On paper we lost five seniors but I think this team has a lot more ability than other teams recognize. I think within this program, we know we’re a lot better than sixth and we’re aiming for the top of the conference.”

Bradley returns three starters from last year including Yohn, who enters the season 16th in program-history with 1,012 career points, O’Leary, who averaged 10.4 points per game last year, and junior Kelsey Budd, who led the team with 95 assists.

In addition to those returning starters, sophomores Shronda Butts, who was on the MVC All-Freshman team last year, and Michelle Young should have bigger roles this season. Freshmen Fantasia Vine, Taylor Shull and Britney Scherber give added depth the guard rotations.

However, the Braves will have to fill their post presence with 5-foot-7-inch senior Brooke Bisping, 6-foot-3-inch junior Alyson Spinas-Valainis and 6-foot-1-inch junior Kelly Frings. Although Bradley has two six-foot freshmen with Jenny Smith and Shelby Mustain to add more height, none of those post players averaged more than 10 minutes per game last year.

“The style of play will be a little bit different [from last year],” O’Leary said. “It will be much faster paced but we’re not going to be just focusing on the perimeter, we want an inside-out game. We might have some undersized posts but [we want to be] more physical and [have] consistency to maintain both an in and out game.”

The Braves will begin their season against Central Michigan next Friday at 11 a.m. in the arena. Bradley beat the Chippewas 86-79 last year.

“New coach, new team, and we have a new kind of mentality this year,” Yohn said.