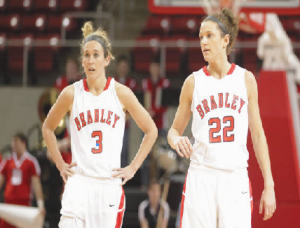 The Bradley women’s basketball program has undergone a tremendous amount of change since its season ended last March.

Gone is 12-year coach Paula Buscher, who compiled a 167-188 record with the Braves before resigning to become the coach at Southern Illinois Edwardsville. In July, Bradley hired her replacement, Michael Brooks, who was an assistant under Buscher for one season.

Brooks said the transition from assistant to head coach has not been a difficult one. He served as co-head coach at Central Methodist University during the 2010-11 season.

“I think the transition for our ladies is the toughest,” he said. “They have to learn to hear my voice in a different realm. As an assistant, a lot of the time you’re the pick me up and as the head coach you’re kind of the hammer coming down. So getting to understand what I want and how I want it, that’s probably been the hardest adjustment for our team up to this point.”

Junior guard Kelsey Budd said Brooks has made a lot of changes around the program in his short time as head coach.

“There’s been a lot of change but I think change for the good,” she said. “Change always kind of takes adjustment. There’s been a lot off the court changes too. The atmosphere coach Brooks brings is something our program definitely needed and is putting us in a position to do well in the season.”

The Braves have moved from a slower, half court orientated offensive game to a more up-tempo, fast paced approach. Brooks also wants the team to be “in the opponents’ grill” defensively when they cross half court.

Brooks said it’s going to take time for the players to understand exactly what he expects from them on and off the court.

“It’s going to be a process,” he said. “Sometimes people forget when you take over a program not only are you changing the plays and the names of the play but you’re also changing the culture and identity for what you want. Not only does the terminology change but also the brand of basketball and how hard you expect them to play and how perfect you expect them to be.”

The multitude of changes have not tempered the team’s expectations for the season. Brooks said he expects this team to be in the top half of the Missouri Valley Conference due to their experienced guard play.

“If we do our jobs, if we play together and play physical we’ll be alright,” he said. “If we’re meeting those things then we should expect for us to be champions. The wins and losses will come from there.”