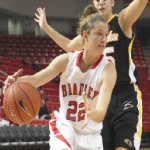 With their only exhibition game of the season, Coach Michael Brooks wanted to show fans that even though his team lost top offensive players from last season, this year’s squad will be a strong and competitive team.

That is why the women’s basketball team came out with a convincing win against Illinois-Springfield 74-50 at Renaissance Coliseum.  Junior guard Michelle Young led the Braves with 19 points and senior forward Kelly Frings came close to a double-double, but ended the game with nine points and eight rebounds.

The visiting Prairie Stars kept it close throughout the first half due to eight threes early. But the Braves responded by coming out in the second half with strong defense that the Prairie Stars could not handle. Then, when the Braves held a 44-40 lead, a steal by Frings and an easy layup by Young triggered a 23-3 run and Bradley never looked back.

Young, the leading scorer on the night, said this year’s team is going to focus a lot on defense, which in her mind will translate into all of the offense the team will need.

“It all starts with defense,” Young said. “If they can’t score and we keep getting steals and not letting them get a shot off, then we will be fine.”

Brooks applauded Young’s efforts on the night and said he knows that she will be a key member in starting the Braves on both the offensive and defensive sides of the ball.

“Michelle is our defensive catalyst,” Brooks said. “She is becoming a better offensive player and getting out in transition because she is so fast is where she is going to make her living this season.”

Brooks said the Braves are still trying to figure out their identity as a team and said he knows that it will take a little time for a team that hasn’t played a lot together to figure out who they are.

“We are still searching and this is a process,” Brooks said. “This is the first time playing in front of people, so it is going to take some time for the seniors and those certain players to step up and lead this team.”

The Braves open the 2013-14 regular season on Friday morning with a matchup against the University of Illinois at Renaissance Coliseum at 11 a.m. Brooks said he knows that the Illini are going to be hungry for the win after the Braves went to Champaign last season and stole a victory.

“I think they will be coming in with a little chip on their shoulder,” Brooks said. “We were able to go over and beat them [last season] on their court and they want to do it to us.”