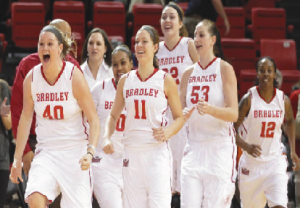 The Braves had just lost two days prior to a team that only had three Missouri Valley Conference wins. Enter the Shockers, who were 10-0 in conference play, and ranked 12th in the nation in scoring defense by holding opponents to an average of 52 points per game.

On the road, Bradley was able to use a 16-2 run in the second half to hand Wichita State their first MVC loss en route to a 75-55 victory.

“I thought we really found our stride in completing three wins in four games versus Wichita State,” said coach Michael Brooks. “We played fast, and controlled tempo for most of the game, and that’s what we try to set out to do. Now we just have to become more consistent throughout the last seven games of the season.”

The Braves were up 50-47 with more than eight minutes remaining before back-to-back three-pointers by juniors Catie O’Leary and Kelsey Budd sparked a 16-2 Bradley run. Just four minutes later, Bradley turned their small lead into a 66-49 advantage.

“I definitely have to give credit to Bradley,” said Wichita’s coach Jody Adams. “Bradley was the team that set the tempo today, and played a true 40 minutes of their game plan.”

Senior Katie Yohn paced the Braves with her second consecutive double-double with 21 points and 10 rebounds. She also had a team-leading five assists and two steals.

“[Yohn] had 21 points and no threes, that’s kind of unheard of for her,” Brooks said. “To be able to do more than just shoot the three, I think she’s found her stride this year in what we’ve been asking her to do. [She’s] been playing more in the post, and she’s guarding the [center] in the starting lineup of the other team. She’s doing some things that she thought she’d never be able to do, and she’s doing it well.”

Bradley lost 91-86 to Missouri State Friday. The Braves trailed for the entire game but were able to cut a 13-point deficit with less than six minutes left to two with 36 seconds to play. However, a turnover and a missed three-pointer sealed the loss.

“I think we’re better than what we look like,” Brooks said. “We’re going to continue to push, we’ve got to make strides, we put ourselves into a position to be successful but we’ve got to play very well the rest of the second half to get out of the [MVC Tournament] play-in game.”

The Braves will end their season-long three-game road swing against Northern Iowa Saturday at 2 p.m.