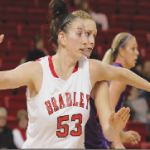 A musical crescendo is a passage played with a gradual increase in volume and intensity. Similarly, the women’s basketball team saved their best games for last.

Although early-season struggles likely cost the team a possible berth in a postseason tournament, they still were able to accomplish feats unseen in recent memory.

On March 7, the Braves beat Illinois State 71-69, their first win against the I-74 rival since 2006. Sophomore Michelle Young scored the game-winning layup with 1.3 seconds left after catching a three-quarter-court pass from senior Brooke Bisping.

“I thought getting that monkey off our back against Illinois State was one of the biggest things that could happen to our program; especially in the dramatic way it happened,” coach Michael Brooks said. “Our team was finally at that level where they could accomplish what they put their minds to.”

After Jan. 31, Bradley finished the season with a 7-5 record, including a 20-point road win against NCAA Tournament participant Wichita State. Ultimately the Braves finished sixth in the Missouri Valley Conference with an 8-10 mark.

In the MVC Tournament, the Braves lost to third-seeded Illinois State 59-48. While the game was within two points with less than three minutes left, the Redbirds scored the next six points to stretch their lead to eight and hold on for the win.

“We just didn’t have enough firepower to sustain it and close at the end of the game,” Brooks said. “And that was kind of our issue all year. We just weren’t able to get over that hump. I thought we played hard and played passionately, we just didn’t close at the right time.”

The Braves will lose both Bisping and Katie Yohn to graduation, but will return a large senior class including Kelsey Budd, Kelly Frings, Catie O’Leary and Alyson Spinas-Valainis along with the other underclassmen. Frings will be returning from a torn ACL that she suffered earlier in the season. Bradley also signed 5-foot-10-inch guard Leti Lerma from Muscatine High School in the Fall Signing Period. Lerma averaged 15.3 points per game as a junior.

“We can’t waver in our belief and our approach,” Brooks said. “If we consistently believe in ourselves and our program, that will make positives happen.”

After completing his first season as head coach, Brooks hopes to finish in the top-four of the MVC next year. Like a crescendo, he wants the basketball program to continue on the progress they made.

“We’re definitely not satisfied because we should have been better than what we were,” Brooks said. “But we feel good about the strides we were able to take as a program as a whole.”