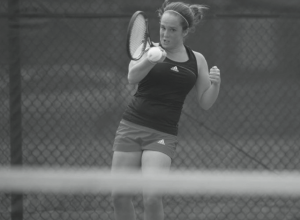 With six returning players and six new freshmen, the Bradley women’s tennis team has high expectations for the spring season.

“We have a tremendous amount of depth, which was lack- ing last season,” said coach Scott Petersen. “We feel that no matter who is in the line-up, they will fight hard and compete for the team.”

Freshmen Cassia Wojtalik and Elizabeth Przystawksi led the team in the fall with six and five wins, respectively. Wojtalik finished third at No. 6 singles during the 2011 Missouri Valley Conference Individual Championships.

Przystawkski went a combined 48-2 in doubles play in her final two prep seasons.

“With the team being so young, I look forward to the growth and development of the team,” Petersen said. “I think there are a lot of pieces in place to have success now and into the near future.”

Freshman Jessie Bertino and McDonagh led the Braves in the fall with a 3-1 record in dou- bles. Freshman Carly Miles and Rodefeld added four more wins in doubles to lead the team. Miles

and Rodefeld earned a first-round victory in the USTA/ITA Central Regional Championships.

“I think the team overall will have multiple wins that will help our team move back in a posi- tive direction,” Petersen said. “It’s going to take a team effort, and I think we have a lot of great play- ers to make this happen.”

Bradley will head to Chicago to face Wisconsin-Milwaukee Saturday and Chicago State Sunday. The Braves return to Peoria for three matches next week starting next Friday against Saint Louis at 1 p.m. in the Clubs at River City.