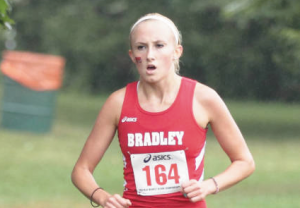 Most students on campus can’t even go from their rooms to class in under 10 minutes, yet freshman Sarah McMahon and sophomore Cassie Lohmeier posted sub 10-minute times in the 3,000 meter race Saturday at the Black and Gold Invitational hosted by Vanderbilt.

McMahon and Lohmeier led the Bradley women’s track and field team with sixth and seventh place finishes, respectively. They became the third and fourth individuals in program history to run sub 10-minute times. McMahon raced to a time of 9:58 and Lohmeier finished right behind her at 9:59.

“I was really happy with our race and my teammates’ races,” Lohmeier said. “We kind of gave off of each other after those races.”

Lohmeier’s goal entering the race was a sub-10 minute 3,000-meter race, and she was named the Bradley Country Financial Scholar-Athlete of the Week for her strong showing.

“I set myself up in the first half and I had a good second half [of the race] and at the 300 meter mark I heard coach yell at me to go now if I wanted to break 10,” Lohmeier said. “I gave it all that I had left. I barely broke it, but I broke it so I’m happy.”

Lohmeier also finished 17th in the 800 meters with a time of 2:20 and is already looking to set new personal records.

Freshman Kyela Specht was Bradley’s top finisher in both the 800 and 1,500-meter races. She finished the 800 meters with a time of 2:18, which ranks ninth on Bradley’s career best list and 10th in the race.

“We were very happy with the competition and the opportunities for our team,” coach Marc Burns said. “We had some people who ran some nice [personal records] and pretty impressive races for this early in the season.”

The Bradley track and field team returns to action Friday and Saturday at the Eastern Illinois Big Blue Classic, starting at 10:30 a.m.