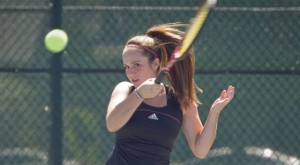 Despite rain and many defeats, the Bradley women’s tennis team opened the 2011 season at home during the Hotels at Grand Prairie Invitational last weekend.

While the team’s tournament record of 16-38 may not be something gloat about, many of the team’s freshmen got their first collegiate victories.

“First college matches [create] a lot of nerves. Some were able to get through it, some of my upperclassmen were able to help them through it,” said coach Scott Petersen. “Once they got the first game jitters out of the way, we had a lot of success on Saturday.”

Due to rain Friday, the tournament was moved to The Clubs at River City, where the Braves faced Chicago State, Illinois State, Robert Morris and South Dakota.

The bright spot of the day came from freshmen Adele Henke and Corey Mattison. Henke, in the No. 1 slot for the team, won her first match in her collegiate career. Mattison achieved the same goal at the No. 4 spot for the team.

The Braves ended the first day with a 2-12 record.

“We weren’t sure what was going to happen that first day,” Petersen said. “Going inside wasn’t ideal. Once we went outside, I think we had some success.”

The skies cleared up Saturday morning, and the doubles team of sophomore Sarah Rodefeld and freshman Carly Miles ushered in a more successful day by drubbing two No. 1 pairs.

Rodefeld continued her success, winning a total of three matches on the day.

Sunday saw the remaining freshman win as Monique Graf and Carly Miles helped the team to a 5-8 record on the last day of the tournament.

While not exactly a successful tournament, the Braves began the season better than in seasons past. With six freshmen, four sophomores and just two juniors, the young team looks to improve with every tournament.

The Braves will take their young squad on the road traveling to the Gopher Invitational in Minneapolis, Minn. this weekend, followed by the UNI Invitational in Cedar Falls, Iowa the following week.