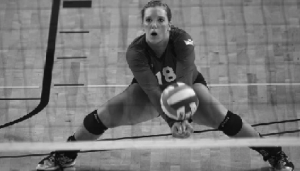 Lauren Zerante does not care that the Bradley volleyball team has lost eight of their last nine games since winning their first five. It does not matter to Zerante that the team is 0-3 in conference play. In Zerante’s mind, the Braves are headed to the conference tournament this year.

“I see us at the conference tournament, “ she said. “Yeah we’re 0-3 in conference right now, but there’s a long way to go. The season is nowhere near over yet.”

With 15 matches left, Zerante is correct. There is ample time left for the volleyball team to regain the ‘rhythm’, as Zerante refers to it, that they seem to have lost since a five-match winning streak to start the season. To her, the Braves are fully capable of getting back to their winning ways.

Winning it turns out, is something Zerante is familiar with. A two-time MVP at York High School, her volleyball team won two Illinois High School Athletics Championships during her time there.

Growing up, Zerante, like many athletes, played many different sports.

“My childhood was centered around sports,” she said. “I grew up with three older brothers who were athletes, and my dad was an athlete growing up – he played baseball in college.”

“The club I played for got serious early,” Zerante said. “[I had] to make a decision if I wanted to keep playing basketball in high school, or stop and focus on volleyball. Volleyball was something I felt more passionate about. I had the most fun with it when it came down to it.”

Although Zerante experienced much success in high school, not everything came so easy.

As a senior in high school, Zerante’s team was once again competing for an IHSA championship. Roughly a week prior to her final game, she began to experience knee pain.

“My trainers thought it was tendinitis,” Zerante said. “I ended up fighting it off and playing in the final game and I had one of my best games.”

Though she played well, she found out a month later she had been playing on a torn knee tendon.

One thing is for certain, no one can question Zerante’s toughness or commitment on the volleyball court.

The hope among Braves fans is that her commitment, along with that of the rest of her teammates, turns things around and allows the Braves to find their ‘rhythm’ again.

Zerante sees the hard work the team puts in at practice.

“We’re working our butts off each day to get better,” she said. “[We focus] on the little things so when it comes to game day, those little things start coming together. The big picture is the win.”

When the team deals with struggles as the Braves have in their past few matches, Zerante feels it is also important to recall past successes as a team and as individual players.

“I try to take it back to what worked for myself in the past,” Zerante said. “We’re in a little rut right now and we’re looking within ourselves and thinking of stuff that’s worked in the past.  It’s just a matter of using those past succeses to turn the season around. We had a great start, it’s just a matter of getting back into that rhythm.”

Zerante and her teammates plan to use those past successes to get the Braves to where Zerante predicted them to be, and where she says her teammates have expected themselves to be even before the season began, in the conference tournament, playing with rhythm.