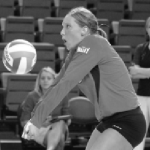 A senior out of Elmhurst, Ill., Lauren Zerante, has shown why this year may be different for the Bradley women’s volleyball team, and she is ready to solidify herself as one of the best liberos in school history.

Even though she has played under two different coaches in her time at Bradley and shifted positions, Zerante said she has gained much experience.

“As a freshman I played outside hitter, and now I’m the libero, so it is a bit different for me,” Zerante said. “I have played a lot of the positions, which gives me a lot of experience on the court.”

Zerante said she knows she has learned so much in her four years, but she and the team are ready to win now.

“Looking back, I have learned a lot from the different leaders that have played here and that has shaped me as a leader on this team,” Zerante said. “This team, more than anything, is hungry for success, and I think our chemistry is something that helps us keep that thought of success in the back of our minds.”

Talking with Zerante, there seems to be a different attitude on this year’s squad and a feeling that this team has the potential to go far this season. She contributes the hot start the Braves have had (starting 6-1 for the first time since 2000) to the great chemistry the team has.

“We mesh really well on and off the court, so those relationships translate to great play on the court,” Zerante said.

“This being our senior year, we want to be the leaders that end our time here on the best note possible and go out on top,” Zerante said. “We all live together, along with (redshirt junior) Allie Falter, and get along really well. We all have the same goals, and our relationship is great, so that helps us on the court as well.”

Zerante finished by looking back at her stellar career on the Hilltop and said she was thankful for the things Bradley and the athletic department has done for her and the volleyball program.

“As a senior and an athlete, I feel very fortunate to be playing at a place like the Renaissance Coliseum all four years since the Coliseum was built my freshman year,” Zerante said. “There has been a clear change in culture and attitude in the athletic department while I’ve been here with the core values that sticks with each team’s minds.”

As the Braves continue their season and start Missouri Valley Conference play on Sunday at 2 p.m., be sure to look out for Zerante and the women’s volleyball team to make some noise in the MVC.