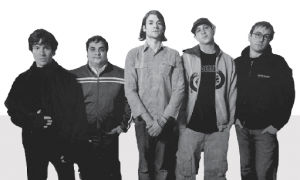 Last Saturday night at the Renaissance Coliseum, Taking Back Sunday entertained Bradley as a band that’s clearly happy to have reunited: their enthusiasm playing together was palpable. Though the crowd they played to was much smaller than previous concerts held at Bradley, a core group of fans greeted their enthusiasm loudly.

Lead singer Adam Lazzara bounded around the stage barefoot, twirling his microphone similarly to The Who’s Roger Daltrey. Taking the stage to the new song “El Paso,” the band delivered a little over an hour’s worth of decent entertainment. They were met by a crowd that was clearly made up of fans, cheering for the group’s hits, including “MakeDamnSure,” “Faith (When I Let You Down)” and “Timberwolves at New Jersey.” The loudest cheers were reserved for “You’re So Last Summer,” which was played after the band members had a “conference” around drummer Mark O’Connell.

He noted the highs and lows a student’s brain can achieve in college, from an intellectually stimulating class to the numbing effects of alcohol. The crowd cheered his every word, though Lazzara was strangely silent through the first half of the set. It was only after about 30 minutes that he really opened up.

The departure of guitarist John Nolan and bassist Shaun Cooper eight years ago was acknowledged through a cover of “Existentialism on Prom Night,” the most well-known song by Nolan and Cooper’s splinter group, Straylight Run. Strangely, Nolan did not sing the lead vocals to the song Saturday night.

The band finished its set with “Cute Without The E (Cut From The Team),” and cheers quickly began for an encore. Oddly, there wasn’t one. The lights came back up, and those cheering confusedly headed for the exits, surprised that there was nothing more.

Opening act. The Maine played before the Arizona state flag, their home state.

Lead singer John O’Callaghan invited an excited fan up on stage, where she announced her love of platypuses and did a cartwheel before jumping down. The band ran through a collection of decent but forgettable pop-punk songs that excited the screaming fans in attendance.

The first opening act, Bad Rabbits, brought a fun, eclectic mix of funk, hip-hop and punk together, as lead singer Dua Boakye called for a party as he took the stage. Boakye was very interactive with the crowd, while he and his fellow band members performed a number of hip-hop inspired line dances in time to their music. This was the most entertaining part of the concert.

Taking Back Sunday delivered on what Cooper promised two weeks ago in an interview with The Scout: the group loved to be up on stage playing for their fans. It was never more evident than their reactions to the ear-piercing cheers for “You’re So Last Summer.” They loved every second of it, and so did the loyal audience.