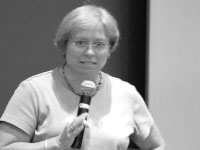 In college, Carolyn Cornelison’s peers knew her as the vice president of her sorority, a varsity athlete, an orientation leader and for being voted outstanding junior on campus.
However, she was also an alcoholic.
Now a speaker who promotes responsible alcohol use and awareness, Cornelison addressed several groups of students on campus this week about how to avoid falling into the traps she did.
When Cornelison had her first drink at age 17, she would never have guessed that during her second year of college she would acquire her first DUI – and receive two more within that same year.
Cornelison, who has a Ph.D. and was the director of the Campus Alcohol and Drug Information Center at Florida State University, attributed her drinking problem to what she calls the “it’s anything but what it is.”
By this, Cornelison means she would blame being overly intoxicated and its consequences on her combination of drinks, order of drinks, what she smoked or being in the wrong place and wrong time, rather than simply drinking too much or making the wrong decision.
“Beer before liquor, never been sicker?” she asked the crowd of the popular saying, which is known as a “rule” of how not to get sick while drinking. “Heck no – I tried that for seven years and it never worked for me.”
Cornelison  said it was easy to fall into the traps of social drinking and blacking out, which she said is chemically-induced amnesia, because her friends laughed at her and never got mad at her for making irresponsible decisions.
“I didn’t know when it was going on that I was drinking differently,” she said, “I still believe everyone was drinking just like me.”
Cornelison told her stories as she remembered them happening. However, some of her memories weren’t quite intact.
When Cornelison received her third DUI, she was blacked out. She knew she’d driven off a cliff, but she said she had no idea she’d hit a van of senior citizens.
An abundance of a thick, overgrown weed on the other side of the cliff is the only reason she’s alive today.
After her DUIs, Cornelison’s mother and grandmother sat her down for an intervention.
Because her parents were nondrinkers and didn’t talk about alcohol, Cornelison said she had no idea her grandmother was an alcoholic, which increased her risk for the disease.
Alcoholism isn’t just being addicted to drinking. There is a chemical difference in the bodies of alcoholics and nonalcoholics, and the alcoholics don’t know when to stop, she said.
Cornelison said the best thing to do with friends who have drinking problems is address them directly. She said she never wanted to hurt anyone and had no idea she was hurting people, because everyone was too scared to confront her.
When friends drink too much in one night, they should never be left alone, Cornelison said.
“The most important thing to do is mess with them,” she said. If you wake them up, they’re semi-conscious. If not, it is a medical emergency. There were 25 deaths on college campuses last year, the common denominator is they were all left alone.”
Cornelison also said it’s important to know most people are making good decisions, but the few who do drink too much tend to stick out more.
“If you go to a party and don’t want to be drinking, the best thing you can do is show up with a cup in your hand,” she said.
More from NewsMore posts in News »