Local Business Feature: Bacci Pizzeria will stay up late with you

Hungry night owls on Bradley’s campus and in the Peoria community can fill their late-night pizza cravings at Bacci Pizzeria, a local pizza shop close to the university.

Located at 1222 W. Bradley Ave., Bacci Pizzeria is a place on campus where students can get a jumbo slice of pizza and pop for $5. How “jumbo,” you ask? About as big as the average laptop.

Bacci is a small Chicago-based pizza chain, but the local store has served Bradley students and surrounding Peoria families since 2007. Co-owner Sean Gubricky is a Chicago native that decided to bring the chain to Bradley.

“This is the only Bacci’s in Peoria,” Gubricky said. “It’s the furthest one from Chicago. After I graduated from Bradley, I decided to open up a store with my friend.”

Whether students sit in or order take out, Bacci Pizzeria is a convenient place to go for a lot of food without breaking the bank. It’s open from 10 a.m. to 3 a.m. every day of the week.

One $5 jumbo slice will satisfy any pizza craving. Customers can even purchase an entire jumbo pizza for $30 – multiple customers can chip in and have a massive pizza feast. 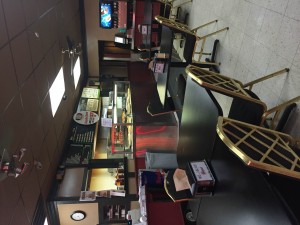 However, Bacci’s has a variety of other items, including Italian beef, chicken wings and a menu of other appetizers, soups, salads and sandwiches.

“When you go to Bacci’s, you get in and get your food quickly,” junior game design major Quentin Young said. “There’s not a lot of waiting time, and it’s super cheap.”

An anonymous source recalled a situation that occurred during a late night Bacci’s food run. The source said a few Bradley students got into a heated argument.

“Two guys were yelling at this one guy,” the anonymous source said. “They backed him up into the window [of the neighboring skate shop].”

The anonymous source said once the altercation ended, they followed the people involved to make sure they were okay.

“I follow this trail of blood,” the anonymous source said. “And I [found] the kid’s apartment.”

There is a wide range of experiences available at Bacci, and they can be had even in the latest hours of the night.

“When other places are closed, Bacci’s will be there for you,” junior animation major Ryan Hughes said. “Especially after a long study session at the library during finals week.”