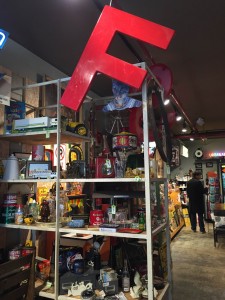 Urban Artifacts is not your grandmother’s antique shop.

The antique store, located close to campus at 925 N. Sheridan Rd., is filled with old street signs, record players, Peoria souvenirs and other novelties from the 1940s through the ‘90s.

Since Walker and his wife, Angie, opened the store about four years ago, Walker has been going to estate sales, auctions or garage sales almost every week to stock his store with antiques, but this hunting is something he is familiar with.

“Probably since I was 10 years old, I’ve been buying and selling and collecting antiques and collectables,” Walker said. “I was very involved [in antiquing] through my 20s and into my 30s, but I kind of got out of it to raise a family, and I always wanted to get back into it.”

Walker said he saw an opportunity to start antiquing again when him and his business partner bought The Sunbeam Building, where Urban Artifacts is located.

“We had the storefronts that we were looking for, and it all came together,” Walker said.

“Walking in right away I was like, ‘Oh gosh, there’s a lot of stuff,’ but once I started going through, I found there was really, really cool stuff there,” he said.

Blumenthal said he was interested in items from sports memorabilia to bottle caps.

“I ended up buying a figurine that was the original set of the front of Wrigley [Field], and it lights up,” Blumenthal said. “It is all sorts of interesting … [Urban Artifacts] is a grossly understated store with some really cool knickknacks for reasonable prices.”