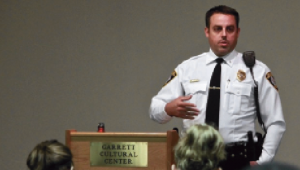 Though it’s the fifth year Bradley has received a portion of a grant to enforce underage drinking laws, this is the first year the Bradley University Police Department is included in the pot.

The total amount for the grant is $9,000, but that was split among the Peoria Police Department, the Peoria City/County Sheriff’s Department, and the Bradley Wellness Center in addition to the BUPD, which received $2,000 of the share.

He also said there is a misconception that officers will have to focus their attention on underage drinking instead of campus security. Instead of pulling officers during their shifts to work on that assignment, Joschko said the grant money, which comes from the Illinois Higher Education Center, funds overtime patrols.

“We will not pull any shift resource and we won’t take anyone off the street,” he said.

“The money has to be used solely for alcohol patrols.”

Joschko said the grant will help officers focus their attention elsewhere during their usual shifts.

“Alcohol is an underlying factor to many incidents on our campus, whether medical or criminal, like a fight,” he said. “We have to use our resources to respond to those situations, and it takes us away from other things.”

In an effort to inform students of the grant, the money the Wellness Center received was primarily spent on advertising.

“This is not something we wanted to use to surprise anyone,” he said. “We made sure the message was out to the students long before we enforced the program.”

The money the BUPD received covers overtime pay for underage drinking patrols from Aug. 30 to Mar. 31 of this school year. None of that money has yet been spent, Joschko said.

“We hope [these patrols] will change behaviors,” he said. “But we would absolutely consider it a success if by the end of the period we made no arrests.”