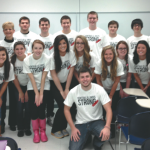 When tornadoes rocked areas surrounding Peoria Nov. 17, the Bradley community reacted quickly to help out. One freshman class is still finding ways to support each other, even after the smoke has cleared.

Communications Professor Jan Frazier said students in her linked speech and English class are passionate to give, especially since one student saw the devastation firsthand.

“Linked classes are tight-knit since students are together for two periods,” she said. “When something happens to anyone in the class, it affects everyone. We instantly said we needed to do something for Jace.”

Freshman English education major Jace Mansfield’s neighborhood in Washington was destroyed. Although his house was spared from destruction, Mansfield said he witnessed chaos just outside his door.

His class purchased Central Illinois Strong T-shirts, which they wore every day class was held this week, in support of Mansfield. Frazier also said more than half of the class volunteered in Washington.

“I think it was cool for Jace to see that we all supported him,” said freshman AEP major Mackenzie Clauss. “It’s unfortunate that it had to happen this way, but it’s nice that everyone could partake in it.”

Mansfield told the class his story about the day the tornadoes hit. He was at his girlfriend’s house in East Peoria, which was unaffected, when he first heard news of the twister.

After the storm died down, Mansfield’s brother contacted him, asking if he and his aunt and uncle, who he lives with in Washington, were all right.

“I texted my uncle, and decided to call after 30 minutes because he usually answers,” Mansfield said. “There was no ring, no voicemail, just quiet. I knew then something was wrong.”

Mansfield attempted to go into Washington after that, and was stopped outside the area by firefighters.

“I saw a house that I’ve seen a hundred times before, and it was gone. And I thought, ‘this is real, and I am scared,’” Mansfield said.

He eventually made his way into Washington, after walking more than two miles to his grandparents’ house, and borrowed his grandmother’s car to find his family. He was stopped again outside the Devonshire neighborhood, so he walked.

“I came over the hill, and it was the worst thing I ever saw in my life. Everything in the neighborhood was just gone,” he said.

Mansfield’s house was unaffected, but he still couldn’t find his parents or his aunt and uncle. He said he went hysterical.

“One of my neighbors grabbed me by the head and said ‘you’re OK, the last time I saw your parents they were OK, your house is OK, you’re fine,’” Mansfield said.

Mansfield soon found his family and his best friend, who rushed to his neighborhood to help. He returned to campus later that night and said he was surprised by how quickly Bradley had responded.

“I went to the Student Center to get Tylenol because I had a headache, and [the cashier] asked if I wanted to donate $10 to the tornado fund and I thought ‘I am the tornado fund,’” he said. “It was cool to see how instantaneous Bradley was.”

After missing class the day after the tornadoes to help his neighbors, Mansfield came back the next time to share his story to the class.

“I said to him that it was the best persuasive speech you could do,” Frazier said. “I think he was very emotional about it, we all were.”