Braves’ Smith leads on and off the field 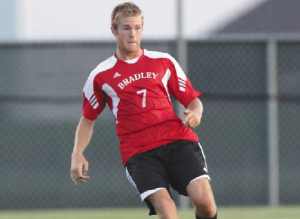 When people think about what makes an athlete, they think of tall, fast, big and ego-driven people. Bradley senior Bobby Smith doesn’t exactly fit that bill. The 6-foot-1 mid-fielder isn’t blessed with any outrageous physical traits or an inflated ego.

“I’m not very athletic,” Smith said. “My lack of athleticism is kind of a running joke on the squad actually. I have a ridiculously low vertical jump for an athlete, or, I think any person for that matter.”

Of course, Smith’s teammates wouldn’t joke about his physical limitations if they ever actually held him back. Despite not being tall, fast or big, Smith has made it far in soccer, farther than most could ever dream of.

After being named the Bradley Soccer co-Newcomer of the Year award along with Bryan Gaul, Smith’s maturation on the field has coincided with the rise of yet another great Bradley soccer team.

While Gaul, who Smith admits may be the greatest player in team history, gets a lot of the publicity with his high scoring acrobatics, Smith is the defensive leader for the Braves. His impressive defensive prowess comes from a combination of factors and happenings that must exist for any athlete to become great at what he does.

Smith was recruited by coach Jim DeRose after the 2007 Braves made it to the Elite Eight in the NCAA Tournament. After many seniors graduated, the 2008 Braves called upon freshmen to fill the shoes left behind.

“Honestly, our freshman class was not ready to fill their spots,” Smith said.

With many freshmen getting serious playing time in Smith’s first year, DeRose was able to shape a team from the ground up that allowed the Braves to reach the NCAA Tournament last year.

“It’s definitely a plus to play under the same coach for your entire career,” Smith said. “You get to know exactly what he expects and demands out of you, and you can become familiar with how the program works over four years. The strong relationships definitely help the team.”

DeRose isn’t the only person who deserves credit; Smith’s teammates have also been an important key to his success.

“I am very comfortable with the teammates I play with in the back, and I am incredibly confident that they have my back when I make a mistake,” Smith said. “They have the hardest job on the field, and they usually do not get the credit they deserve. Tommy Fritze, Mike Hnat, Jason Coon, Marcus Schademann, Matt Keuhl, Scotty Davis, Keegan Balle, and anyone else that has performed that role, they are all beasts.”

Even when it comes to off the pitch success, such as making the A.D. honor roll six times, Smith is quick to credit those around him.

“We are blessed to have a ton of resources at our disposal, and I try to make use of them,” Smith said. “I have also had a huge amount of help from Jen Jones and professors throughout my career in working out a schedule around soccer and school.”

Even though all the support around a player can help them grow, the drive of an athlete is what makes one great. That drive can make one a finalist for the Lowe’s Senior CLASS Award. Behind the eternal gratitude Smith has for others, there is that drive.

“I just want to be remembered as a guy who played as hard as he could, cared about his teammates and won,” Smith said. “Mostly won.”