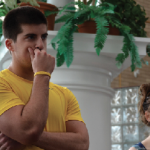 Nearly 400 students chose to “VOTE BLUE” on Monday and Tuesday, resulting in a three-race sweep for the Blue Ticket student body officer candidates.

Shaw, along with the rest of the Blue Ticket, was opposed by the BUnited ticket in the runoffs and numerous other competitors in the primaries. The ticket added sophomore Brian Deal as the candidate for secretary of the assembly after the initial elections on April 1 and 2.

Deal was voted into the secretary of the assembly position with 466 votes over BUnited’s sophomore Kelsie Smith’s 239 votes.

And finally, with only 32 votes splitting the difference, Shaw was selected as student body president with 377 votes to BUnited’s sophomore Dashawn Cason’s 345 votes. This followed Cason’s lead in the primaries.

Speaking on behalf of his ticket, Kassam said the fact that the whole Blue Ticket won was the most surprising and exciting part.

“We were very glad that the entire team was able to win, as we have experience working together,” he said. “Not only was it an individual win for all four of us, but it was a team win.”

Kassam also said the ticket was ready to speak for the student body.

“Our team ran for office on the basis that we wanted to represent the student body and that will be an ongoing commitment over the course of the year,” he said.

Of the Blue Ticket’s specific goals, Kassam said the team would work for the approval of a mascot and an increase in school spirit. The ticket also hopes to improve the quality of academic services provided to students.

And while the campaign was difficult, Kassam said the ticket was grateful for their supporters and that the members were ready to make a difference at Bradley.

“We knew that we would have to work hard over the next week to keep campaigning and gaining support,” he said. “We were appreciative of the support we received that led us into the runoff, and we’re ready to build upon that and gain more support in order to be successful.”