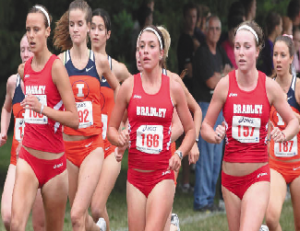 Junior Cassie Lohmeier was the top finisher for the Braves coming in fifth, finishing behind four runners from Iowa. She ran a career-best 17:21 in the three mile race beating her previous time by 11 seconds.

After Lohmeier, youth played a huge role for Bradley. Six of the top nine finishers for the Braves were freshmen.

Coach Marc Burns said he thought the team had a strong start to the season.

“We’re pleased with where we are at,” he said. “Our training has gone well. I’d say we’re doing great at this point in the season.”

Burns said the Bradley Open is a tune up for the bigger races later in the season so the meet was meant for younger runners to gain experience and for older members of the team to get back into the flow of things.

“We got a long way to go,” he said. “It’s a long season. The way we structure our training program, everything is designed to be at our best at the end of the year. These early season meets are opportunities and dress rehearsals for later in the year. What we try to do these first couple meets is get our feet wet and get some good experience under our belts.”

The women’s cross country team carries high expectations heading into the year. They were picked to finish second in the MVC and 11th in the entire Midwest Region.

Burns said the high rankings are an honor, but the team can’t get too big of a head.

“It’s a sign of respect for our program and where our program is heading,” he said. “It’s a good sign of where people think we’re going, but it doesn’t mean anything. We’ve got to back that stuff up and earn those rankings.”

Despite the expectations placed upon them, the team already had high hopes for themselves this season.

“Our goal is to win the conference meet,” Burns said. “We were third last year so anything better than third is going to be a positive step in the right direction. But certainly at this point now we’re setting our sights on winning.”

The Braves run in their second meet of the season this evening in Normal in the Illinois Intercollegiates.